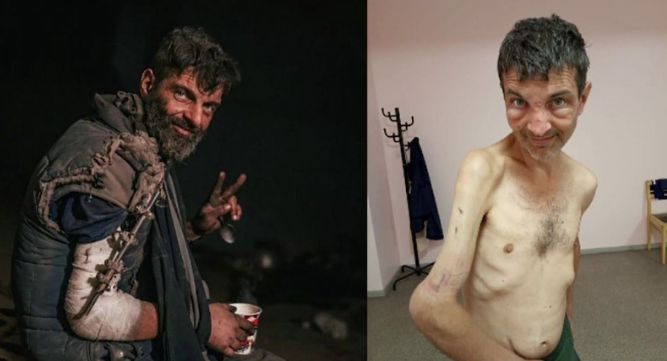 When Ukrainian marine Mikhailo Dianov was released from Russian detention, his photo shocked the world.

His body was emaciated after four months as a prisoner of war.

When I met him, he was unrecognisable from the photos I’d seen of the well-built fighter in Mariupol, Ukraine. His clothes hung from his frail frame. His gaunt face seemed far older than his 42 years.

I had so many questions. Crucially, did you worry you wouldn’t survive?

“We thought about this every day,” Mikhailo tells me. “We first started having those thoughts at the Azovstal steel plant.

“At Azovstal we thought it was the end.”

Mikhailo was taken following weeks under siege in Mariupol defending the steel works. It was the last corner of the city to fall in May.

He was among 215 recently released in a high-profile prisoner swap with Russia,  about captivity.

“Believe me, after a month of being starved, when you close your eyes, you forget about your family, about your country, about everything. The only thing you think about is food.” 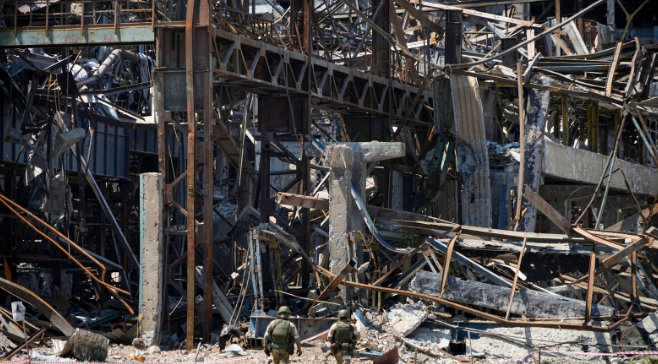 Mikhailo lost 40kg (more than six stone) in weight in his four months as a prisoner of war.

“It was impossible to eat. You were given 30 seconds for each meal,” says Mikhailo. “In 30 seconds you had to eat everything you could.

“Bread was deliberately very hard. Guys who had their teeth knocked out couldn’t manage to eat in time.

The meals sound pitiful, and the process of eating utterly humiliating.

This all took place in the Olenivka prison in Russian-controlled Donetsk – a place Mikhailo refers to as a concentration camp.

It clearly seems prisoners of war being held there are being starved deliberately.

Prisoners were ‘beaten with sticks and given electric shocks’

He describes how they would be thrown in solitary confinement and tortured for picking up a berry from the ground and eating it.

He says they were beaten with sticks, given electric shocks and had needles put under their nails

The layout of the prison has concentration camp connotations, too.

From the air, satellite images reveal identical blocks in a row where prisoners are housed.

Mikhailo says the blocks are designed for 150 people, but he was packed into one with 800 other prisoners.

The conditions were so cramped, his leg muscles wasted and walking is now a challenge. We don’t walk far together and soon find a bench for him to rest.

It is very hard for us to verify what is happening in Olenivka prison due to the lack of access to Russian controlled areas.

We’ve spoken to the partner of another Azovstal fighter who was released in the same prisoner swap. She describes similar conditions and also refers to the place as a concentration camp.

Then there’s Mikhailo’s physical condition, which speaks for itself.

One thing we do know about Olenivka prison is it was bombed in July and more than 50 people were killed. I ask Mikhailo about the attack.

He’d been at a different location at the time, receiving treatment on his arm. He describes a reckless operation carried out with a pair of pliers and no anaesthesia.

Before he was taken prisoner, a photo at Azovstal shows Mikhailo with a bandage on his broken right arm. During his time in captivity, the bone healed in a semicircle due to a lack of medical care.

Then this – the moment he was released.

“We were stripped completely naked. They took off our medical casts, everything. They searched us. And then we had to squat like that for five hours. Without a bench, of course.

“We simply waited. We didn’t know what was going to happen to us,” says Mikhailo.

He has a large graze at the top of his nose. I ask what happened.

“Duct tape,” he replies. “They wrapped tape around my head and pushed their legs into my stomach, so they could make it tighter, and I spent a day, a day and a half like that.” 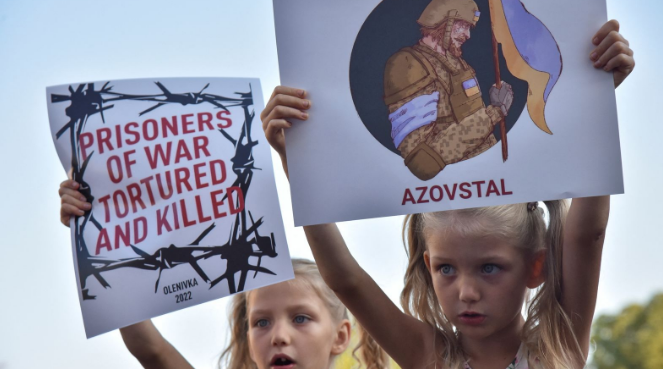 ‘A lot of things have lost their value’

He travelled for 36 hours with his eyes taped with no idea where he was going – moved from a bus to an aeroplane to a bus again.

It was only after the tape was finally removed that he realised he was back in Ukraine.

He now needs to gain 20kg before he can have corrective surgery on his arm.

The psychological impact will likely take far longer to treat.

“Everyone is traumatised,” he tells me, “I consider myself to be a mentally strong person, but for me a lot of things have lost their value.”

The picture he’s painted of Russian detention is far worse than many imagined.

Many of the conditions described are against the Geneva Conventions. And thousands more Ukrainian prisoners of war are understood to still be in Olenivka prison.