The key city had been under Russian occupation for months but was recaptured amid the surging Ukrainian offensive.

A mass burial site containing around 440 graves has been found in the Ukrainian city of Izyum after it was liberated from Russian control, a top police officer

Ukraine’s president confirmed that a “mass burial site” has been found but he said “clear, verified information” would be released on Friday.

“We want the world to know what is really happening and what the Russian occupation has led to,” Volodymyr Zelenskyy said in a nightly video address to the nation.

An image released by his chief of staff showed a number of wooden crosses jutting up from mounds in the earth, surrounded by trees.

“Necessary procedures have already begun. All bodies will be exhumed and sent for forensic examination… Russia is a murderer country. A state sponsor of terrorism.”

Earlier, Sky News broadcast an interview with Serhii Bolvinov, the chief police investigator for the Kharkiv region, who revealed the discovery of the mass burial site.

He said officers were also aware of a number of other sites elsewhere in the Kharkiv region.

Mr Bolvinov and his team, along with prosecutors and other specialists, have the vital task of investigating all suspected Russian war crimes in the villages, towns and cities that have been recaptured by Ukrainian troops in a lightning offensive this month.

Speaking about the Izyum site, the chief investigator said: “I can say that there is one of the biggest burials in one liberated city, which contains more than 440 graves. Some 440 bodies were buried in one place.”

Asked if he could say how the victims had died, he responded: “We know that some were killed [shot dead], some died because of artillery fire, so-called mine explosion traumas. Some died because of airstrikes. Also we have information that a lot of bodies have not been not identified yet. So the reasons of death will be established during the investigations.” 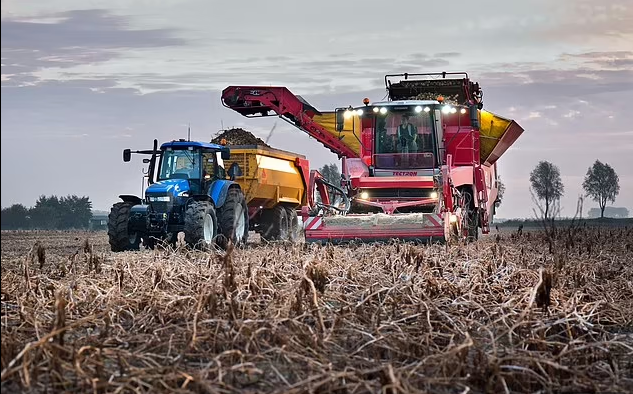 Separately, Ukraine’s Ministry of Defence in a social media post wrote: “Mass graves are being discovered in Izyum after liberation from the russcists [Russian fascists is the term Ukraine often uses to describe the Russian invaders].

In addition, the head of the national police in Kharkiv region said investigators would inspect a “burial place” on Friday in a city that had previously been under occupation.

Volodymyr Tymoshko did not identify the location, but he said: “By our estimates there are more than 440 bodies.” 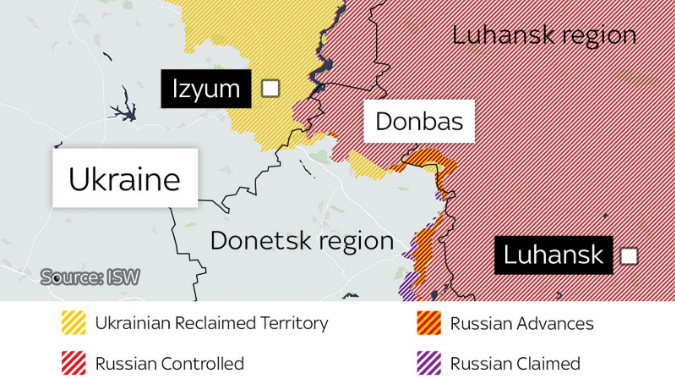 President Zelenskyy likened the suffering in Izyum to the atrocities committed by Russian forces in the town of Bucha, just outside Kyiv, and the city of Mariupol, in the south.

He had ventured to the war-shattered city on Wednesday despite it standing close to Russia’s frontline. Ukrainian soldiers only recaptured the area days earlier.

“Russia leaves death everywhere,” Mr Zelenskyy said. “It must be held accountable for that. The world must hold Russia to real account for this war.”

Sky News has not yet visited the makeshift burial site in Izyum, but journalists have been invited to travel to the area on Friday.

Mr Bolvinov was speaking from an undisclosed location in Kharkiv city after the police station where he and his officers work was hit in Russian missile strikes earlier in the week.

Still hard at work despite the disruption, he described how the discovery of the mass burial site had affected him.

“For me, it was especially shocking and horrific and this is a crime against humanity. It shouldn’t be like this in a civilised world in 2022. This is such a horrendous story and unpleasant from any angle. I am confident that the evil will definitely be punished.”

The task faced by investigators in Kharkiv is potentially even more difficult than at previously liberated areas such as parts of the Kyiv region and further north, where cases of suspected torture and murder have been documented during Russian occupation.

Russian forces only controlled parts of the Kyiv region and further north for about a month. By contrast, some parts of Kharkiv were under Russian control for more than five months.

It means many of the victims have been dead for much longer, making forensic examination of bodies to ascertain cause of death more challenging. 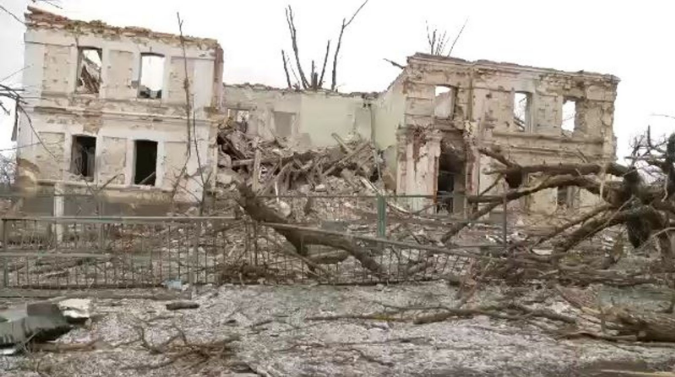 As well as identifying victims and cause of death, the police officers are gathering evidence such as DNA to help build prosecution cases against the perpetrators.

Mr Bolvinov said he was confident that the work his team and others were doing would culminate in Russia and even President Vladimir Putin facing international criminal charges.

“I definitely believe that,” the top investigator said.

“I believe in the truth. I believe that our daily painstaking work will have results – convicting those responsible for this war for criminal responsibility.”