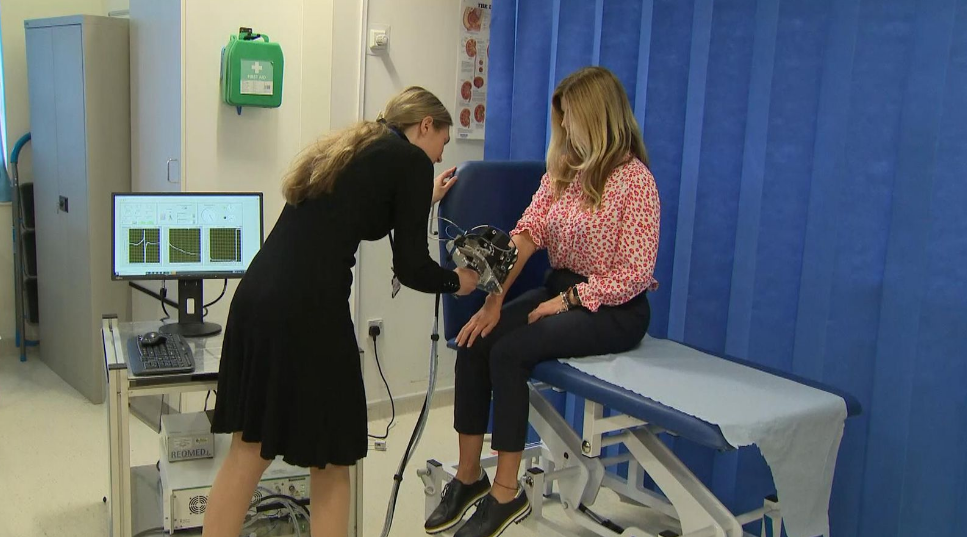 Experts say some cancerous cells can be left behind during surgery – but it’s hoped this technology will improve accuracy and slash operating times, alleviating pressure on the NHS.

The world’s first scanner capable of detecting skin cancer invisible to the human eye has been invented to improve diagnosis and speed up surgery.

The aim of the “Skinometer” – developed by scientists at Warwick University – is to detect how far the cancer has spread beneath the skin.

Skin cancer patients being treated at University Hospital Coventry are now being encouraged to take part in testing of the technology.

Professor Joe Hardwicke, a consultant plastic and reconstructive surgeon at the hospital, says the development is “very exciting”.

He explained: “Some skin cancers can be below the skin that we can’t actually see, so when we do remove them surgically, occasionally a little bit can be left behind.

“The hope with this technology is that we can be more accurate in our surgery and remove more of the cancers on the first occasion.”

Currently, multiple skin samples need to be taken and examined during a procedure to make sure all the cancer cells are removed – but using the skin scanner should significantly reduce surgery times.

In 2013, Heather Norgrove found an unusual white lump on her upper arm. It was removed, but six months later it was back and bigger than before.

Only then was she diagnosed with invasive melanoma that had to be cut out, and a skin graft was required.

“If we had had a scanner, it would have indicated that was a problem immediately,” she said.

“We would have known there was a fair chance that it was malignant, it had burst inwards and therefore underneath it was much bigger than on top.”

Importantly, she says the scanner would have prevented the “long, awful wait” for diagnosis and treatment could have started sooner.

The Skinometer uses pulses of light from the terahertz part of the light spectrum, which strike the skin’s surface and bounce off.

The waveforms of the reflected light show how far the cancer has spread beneath the skin.

“We’re collecting the first data in the world to try and show that this will work and that we can really speed up cancer diagnosis and treatment times,” she said.

“There are about 16,000 new cases of skin cancer diagnosed in the UK alone each year and that obviously puts a strain on the NHS, so if we can speed up the process… that’s going to relieve a lot of pressure and reduce costs for the NHS.”

She hopes the Skinometer could be in use within five years and eventually be available in GP surgeries.

There’s a possibility it could help detect colon cancer too.

And by accurately measuring the moisture levels, it’s also hoped it could be used to develop specific sun creams for different types of skin.

For Heather, it might have made all the difference. She’s been through extensive treatment after her cancer spread.

Now, she says it is “imperative” skin cancer patients volunteer to take part in the research so that others can be helped in the future.

The project has been funded by the Engineering and Physical Sciences Research Council, with additional support from Cancer Research UK.

Previous newsReleased Ukrainian prisoner of war reveals torment at the hands of Russians
Next news Not another TikTok clone! Now TWITTER is adding a scrolling feed of videos to its iOS app that can be expanded to ‘immersive’ full screen with a single tap