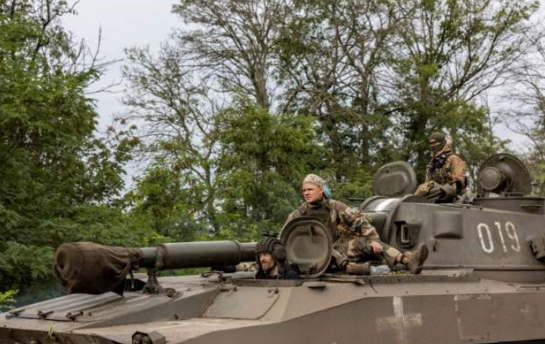 Ukrainian forces encircled the eastern city of Lyman in a counteroffensive that has humiliated the Kremlin
Russia’s own Tass and RIA news agencies announced troops fled Lyman, citing the Russian defense ministry
It comes after Putin was pictured grinning and laughing yesterday after he annexed four Ukrainian regions

Russia has been forced to withdraw troops from a key Ukrainian city this afternoon as Ukraine’s eastern counteroffensive recaptures more territory.

Ukrainian forces encircled the strategic eastern city of Lyman on Saturday in a counteroffensive that has humiliated the Kremlin, while Russian bombardments intensified after Moscow illegally annexed a swath of Ukrainian territory in a sharp escalation of the war.

It comes after the Russian President Vladimir Putin was pictured grinning and laughing yesterday after he annexed four Ukrainian regions following what the west has blasted as sham referendums.

Lyman is 160 kilometers (100 miles) southeast of Kharkiv, Ukraine’s second-largest city. Ukrainian forces had pushed across the Oskil River as part of a counteroffensive that saw Kyiv retake vast swathes of territory beginning in September.

The city is a key transportation hub and has been an important site in the Russian front line for both ground communications and logistics.

The city is symbolically important too as it is in an area Russia claims to have annexed under its control.

In a bizarre rant, Putin talked for 40 minutes about how the area would remain part of Russia ‘forever’, in a speech which included references to Satanism and colialism.

Now with it gone, Ukraine can push further potentially into the occupied Luhansk region, which is one of four regions that Russia annexed Friday after an internationally criticized referendum vote at gunpoint.

It comes as Ukraine announced its determination to join NATO by applying via an accelerated route this week. 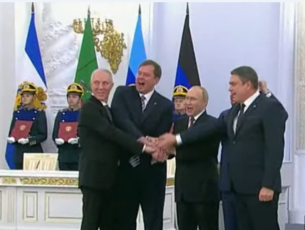 In a speech on Friday, Putin spoke to hundreds of ashen-faced officials, and the despot lashed out at the West’s ‘neo-colonial’ foreign policy.

‘I want the Ukrainian authorities and their real masters in the West to hear me, so that they remember this,’ Putin said.

‘People living in Luhansk and Donetsk, Kherson and Zaporizhzhia are now becoming our citizens for ever.’

He claimed the occupied regions wanted to join Russia because they were upset about the ‘tragedy’ of the collapse of the Soviet Union. ‘We call on the Kyiv regime to immediately end hostilities, end the war that they unleashed back in 2014 and return to the negotiating table,’ he added.

But the 69-year-old Russian president ruled out discussing the return of the four eastern regions. ‘There is nothing stronger than their willingness to go back to their true historic homeland,’ he said in yet another denial of Ukraine’s right to exist.

The reference to 2014 appears to be in reference to Putin’s annexation of Crimea, another hostile act his Russia took against Ukraine.

The fighting comes at a pivotal moment in Russian President Vladimir Putin’s war. Facing Ukrainian gains on the battlefield – which he frames as a U.S.-orchestrated effort to destroy Russia – Putin this week heightened his threats of nuclear force and used his most aggressive, anti-Western rhetoric to date.

Despite Putin’s annexation of four regions in Ukraine yesterday, Ukrainian President Volodymyr Zelenskyy and his military have vowed to keep on fighting to liberate the annexed regions and other Russian-occupied areas.

Ukrainian officials said Saturday their forces had surrounded some 5,000 Russian forces who were trying to hold the eastern city of Lyman, which is located in Luhansk, one of the four annexed areas.

It remained unclear whether Ukrainian forces have entered the city itself. Luhansk Governor Serhiy Haidai claimed that all routes to resupply Russian forces in Lyman were blocked.

Russia has not confirmed that its forces were cut off, but said its troops had withdrawn from the area ‘due to the risk of encirclement’.

The governor of the Luhansk province, Serhiy Haidai, said the besieged troops had begged on Friday to be allowed to leave Lyman. Their commanders refused, he claimed.

On Saturday the governor of the Kharkiv region, Oleh Syniehubov, said 20 civilians were killed in an attack on a convoy of people trying to flee the Kupiansky district, calling it ‘Cruelty that can’t be justified.’

The Security Service of Ukraine, the secret police force known by the acronym SBU, posted photographs of the attacked convoy.

At least one truck appeared to have been blown up, with burned corpses in what remained of its truck bed.

Another vehicle at the front of the convoy also had been ablaze. Bodies lay on the side of the road or still inside their vehicles, which appeared pockmarked with bullet holes.

The SBU said the convoy was attacked with ‘small arms fire,’ while the governor said it was shelled. The discrepancy could not be immediately resolved. The exact date of the attack was not announced.

Russian forces have not acknowledged or commented on the attack. Russian troops have retreated from much of the Kharkiv region after a successful Ukrainian counteroffensive last month but have continued to shell the area.

In an apparent attempt to secure Moscow’s hold on the newly annexed territory, Russian forces seized the director-general of the Zaporizhzhia Nuclear Power Plant, Ihor Murashov, around 4 pm Friday, according to the Ukrainian state nuclear company Energoatom.

That was just hours after Putin signed treaties to absorb Moscow-controlled Ukrainian territory into Russia, including the area around the nuclear plant.

Energoatom said Russian troops stopped Murashov’s car, blindfolded him and then took him to an undisclosed location.

Russia did not publicly comment on the report. The International Atomic Energy Agency said Saturday that Russia told it that ‘the director-general of the Zaporizhzhia nuclear power plant was temporarily detained to answer questions.’

The Vienna-based agency did not immediately elaborate.

The power plant repeatedly has been caught in the crossfire of the war. Ukrainian technicians continued running it after Russian troops seized the power station, and its last reactor was shut down in September as a precautionary measure amid ongoing shelling nearby.

In its heaviest barrage in weeks, Russia’s military on Friday pounded Ukrainian cities with missiles, rockets and suicide drones, with one strike in the Zaporizhzhia region’s capital killing 30 people and wounding 88.

In a daily briefing on Saturday the British Defense Ministry said the Russians ‘almost certainly’ struck a humanitarian convoy there with S-300 anti-aircraft missiles.

Russia is increasingly using anti-aircraft missiles to conduct attacks on the ground likely due to a lack of munitions, the British military said.

The attack came while Putin was preparing to sign the annexation treaties, which included the Zaporizhzhia region. Russian-installed officials in Zaporizhzhia blamed Ukrainian forces, but gave no evidence.

In other fighting reported Saturday, four people were killed and six injured by Russian shelling in the Donetsk region on Friday, governor Pavlo Kyrylenko reported.

The Russian army also struck the southern Ukrainian city of Mykolaiv twice overnight, once with drones and the second time with missiles, according to regional Gov. Vitaliy Kim. Five people were injured, including a 3-month-old baby, he said.

After Friday’s land grab, Russia now claims sovereignty over 15% of Ukraine, in what NATO Secretary-General Jens Stoltenberg called ‘the largest attempted annexation of European territory by force since the Second World War.’

He added that the war is at ‘a pivotal moment.’

In Washington, President Joe Biden signed a bill Friday that provides another infusion of military and economic aid to Ukraine.