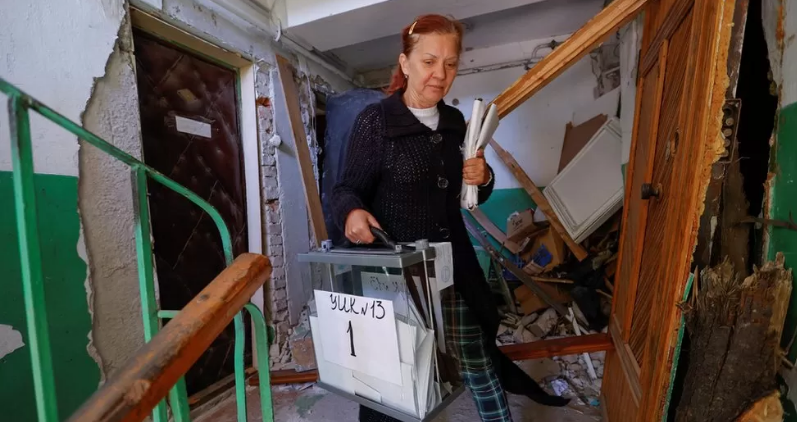 Tuesday is the final day of a ballot for Russian-held regions of Ukraine which the government in Kyiv and its Western allies dismiss as a sham.

Nearly four million people from the eastern regions of Donetsk and Luhansk, and the southern regions of Kherson and Zaporizhzhia, are being asked to attend polling stations and vote in so-called referendums on joining Russia.

This follows four days of early voting during which allegations of intimidation multiplied as election officials went house to house accompanied by armed guards.

The votes, called with just a few days’ notice, serve a deadly serious purpose as they will be used by the Kremlin to legitimise its invasion aims.

If Russia absorbs these regions, making up about 15% of Ukraine’s territory, it could take the war to a new and more dangerous level, with Moscow portraying any attempt by Ukraine to regain them as an attack on its sovereign territory

Were the guns there to protect you as you voted, or to cow you into voting? That was a question passing through people’s minds in recent days as election officials escorted by soldiers come to knock on their doors.

Serhiy Haidai, the governor-in-exile of Luhansk region, accused the separatist authorities there of taking down the names of people who voted against joining Russia or who refused to vote at all.

“Representatives of the occupation forces are going from apartment to apartment with ballot boxes,” he said, quoted by Reuters news agency. “This is a secret ballot, right?”

Two local “collaborators” had arrived with two Russian soldiers at their flat to give them a ballot paper to sign, she said. 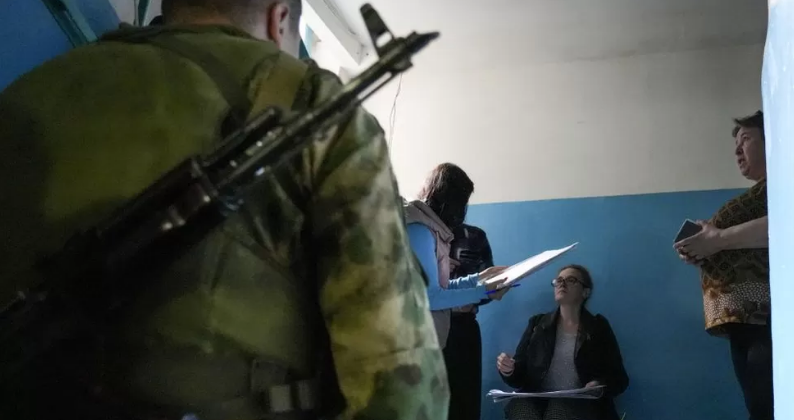 “My dad put ‘no’ [to joining Russia],” the woman said. “My mum stood nearby, and asked what would happen for putting ‘no’. They said, ‘Nothing’. Mum is now worried that the Russians will persecute them.”

Another woman in the embattled town of Enerhodar, where the Zaporizhzhia nuclear power station is located, told the BBC: “You have to answer verbally and the soldier marks the answer on the sheet and keeps it.”

Ukrainian journalist Maxim Eristavi tweeted to say that his family had been “forced to vote at gunpoint” in southern Ukraine.

“They come to your house,” he wrote. “You have to openly tick the box for being annexed by Russia (or for staying with Ukraine if you feel suicidal). All while armed gunmen watch you.”

Petro Kobernik, who left Kherson just before the voting began, told AP in an interview by phone: “The situation is changing rapidly, and people fear that they will be hurt either by the Russian military, or Ukrainian guerrillas and the advancing Ukrainian troops.”

The vote on paper

The questions on the ballot papers (there is no digital voting) differ according to region.

This is because pro-Russian separatists have been running parts of Donetsk and Luhansk since 2014 when they held unrecognised independence referendums.

Voters there are being asked whether they “support their republic’s accession to Russia as a federal subject”.

In the parts of Kherson and Zaporizhzhia occupied by Russian forces since the invasion in February, people are being asked if they “favour the region’s secession from Ukraine, creation of an independent country and subsequent accession to Russia as a federal subject”.

Voting was spread over five days to allow for ballots to be “organised in communities and in a door-to-door manner for security reasons”, Russian state news agency Tass reports.

Refugees now scattered across Russia can vote in as many as 200 polling stations there.

The vote is being heavily guarded by Russian or Russian-backed security forces, and with reason.

Not only have Ukrainian forces been pushing the Russians and their separatist allies back in both the east and south, but attacks on figures associated with the Russian occupation have mounted. 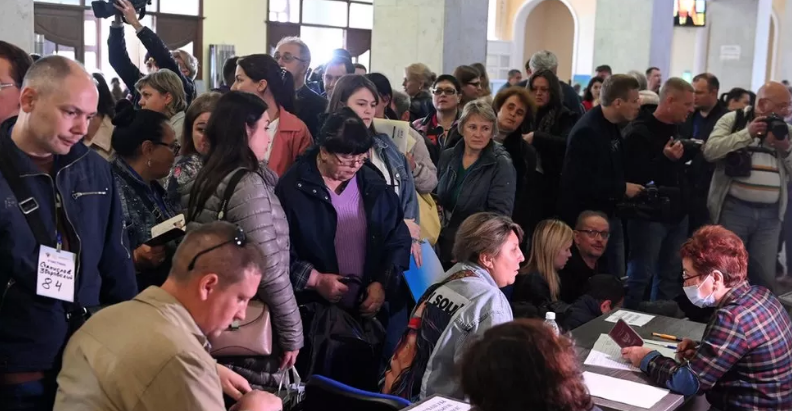 Former Ukrainian MP Oleksiy Zhuravko, who championed the Russian invasion, was killed along with another person in a missile attack on a hotel in Kherson on Sunday.

Reports say that Russian journalists who were also staying at the hotel escaped uninjured.

In the city of Berdyansk in Zaporizhzhia region, the deputy head of the city administration and his wife who headed the city election commission were killed in an attack a week before the referendum.

Members of a guerrilla group called the Yellow Band have spread leaflets threatening anyone who votes and urging others to send photos and video of anyone who does in order to track them down later, AP reports.

The guerrillas have also sent around phone numbers of election commission chiefs in Kherson region, asking activists to “make their life unbearable”, the agency reports.

Ukraine has threatened anyone organising or supporting the so-called referendums with eventual criminal prosecution, saying they face up to 15 years in prison if convicted.

Even Serbia, which has close ties with Moscow and is one of the few European countries not to join sanctions on Russia, has announced it will not recognise the results of the voting.

Foreign Minister Nikola Selakovic said that to do so would be “completely contrary” to his country’s policy of “preserving territorial integrity and sovereignty and… commitment to the principle of inviolability of borders”.

But in the face of international opposition, Russia’s Foreign Minister, Sergei Lavrov, insisted that the votes were “the expression of the will” of the people who lived in the regions.

He confirmed that if the four regions joined Russia they would have the same protection as any other part of its territory, including protection with nuclear weapons.

The White House says the US will never recognise “Ukrainian territory as anything other than part of Ukraine”.

In its view, the referendums are a “sham – a false pretext to try to annex parts of Ukraine by force in flagrant violation of international law”.

The UK has responded with new sanctions targeting top Russian officials involved in enforcing the votes among others.