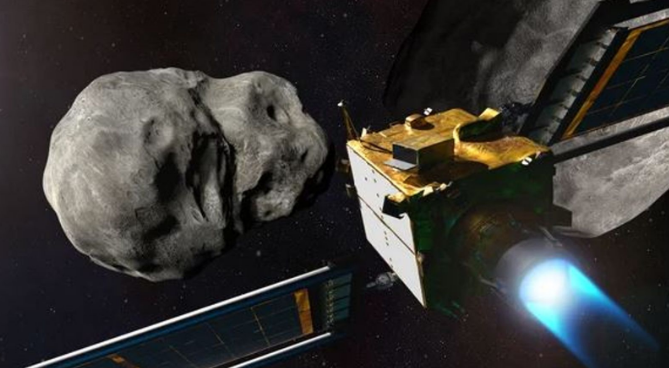 The Double Asteroid Redirection Test (DART) has been carried out to see if humanity has a chance of preventing the kind of disaster that wiped out the dinosaurs.

NASA has successfully smashed a spacecraft into an asteroid seven million miles from Earth.

The last image from the “vending machine-sized” collider showed the surface of the asteroid Dimorphos seconds before impact.

The Double Asteroid Redirection Test (DART) is the first-ever trial of a “planetary defence system”.

If the orbit of an asteroid can be changed by an object sent into space, humanity may have a chance at protecting itself from the kind of disaster that did it for the dinosaurs.

NASA, and the international team of astronomers working with them, chose their target carefully. To prove success, they needed an asteroid they can carefully monitor following the collision. They also needed to make sure any impact wouldn’t send a previously harmless piece of rock spiralling towards Earth.

They picked a pair of asteroids: the 780 metre-wide Didymos, and its moon Dimorphos which is 160m wide – about the size of the Great Pyramid.

Because Dimorphos is already safely orbiting its bigger partner, they can study the change in its behaviour following the collision.

Dimorphos is also a fairly common size of asteroid. While significantly smaller than a kilometres-wide “planet killer”, it’s of a type easily big enough to destroy a city.

“What Dart is going up there to prove is that we actually do have a system for kinetic deflection, nudging these away and nudging them off course,” says Betsy Congdon, DART’s mechanical systems engineer at Johns Hopkins University in Maryland.

Despite smashing a half-tonne spacecraft into Dimorphos at close to 15,000 miles an hour, the effect on the asteroid is expected to be tiny – checking its speed by just 0.4mm per second.

But over time, that should have a measurable effect on its orbit. An array of land and space-based telescopes including NASA and ESA’s new James Webb Space Telescope, will all study the asteroid to measure the outcome of the test. 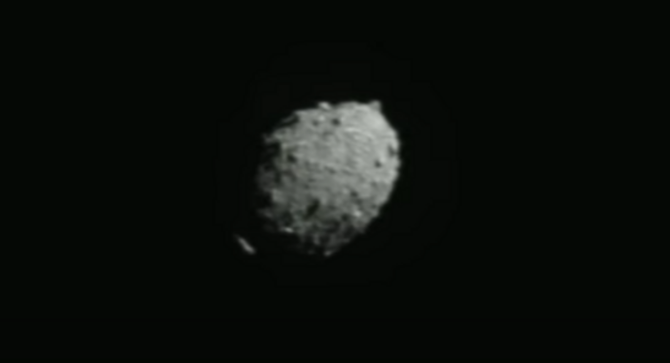 Although it’s only a modest objective, the engineering involved was a major undertaking. Didymos is far too small and far away for DART to be steered into it from Earth. The probe had to use an autonomous guidance system to target the asteroid which is so small it was only visible in DART’s cameras about 50 minutes before impact. But the sat-nav seems to have worked perfectly.

The hope is, that a tiny nudge might be enough – if the impact is sufficiently far away – to deflect a future asteroid on collision course with Earth off target.

Astronomers estimate they have tracked the orbits of 95% of asteroids large enough to destroy life on Earth and none is currently on a collision course. But there are many smaller ones. According to NASA, no known asteroid larger than 140m across is likely to hit Earth in the next 100 years. But they think they’ve only found about 40% of them.

Around 66 million years ago a 10km-wide asteroid slammed into what is now the Yucatan Peninsular of Mexico. It left a crater 110 miles wide and 12 miles deep. The resulting change in the planet’s climate is thought to have caused the Cretaceous-Paleogene extinction event. The impact wiped out 75% of animal and plant species on Earth – and famously ended the reign of flightless dinosaurs.

But even small space rocks can lead to a bad day on Earth. In 2013 a 20m-wide asteroid exploded as a meteorite over the city of Chelyabinsk in the Ural region of Russia. The blast was equivalent to 500 tonnes of TNT, about a third of the force of the Hiroshima bomb. While no deaths were reported there were more than 1,400 casualties, some of them serious.

“An asteroid impact is the one kind of natural disaster that we could potentially see coming decades away,” says Prof Colin Snodgrass at the University of Edinburgh is a member of the DART team.

He’s helped set up a telescope in Kenya to monitor the impact from Earth. “If one [the size of Dimorphos] was ever discovered coming towards earth being able to do something about that seems like a very sensible technology to have.”