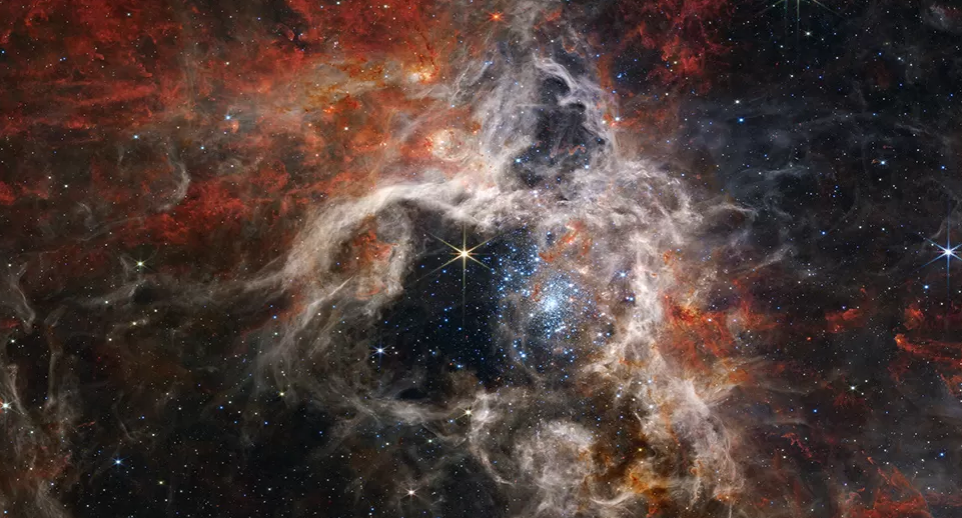 It was the $10bn gift to the world. A machine that would show us our place in the Universe.

The James Webb Space Telescope was launched exactly a year ago, on Christmas Day. It had taken three decades to plan, design and build.

Many wondered whether this successor to the famed Hubble Space Telescope could actually live up to expectations.

We had to wait a few months while its epic 6.5m primary mirror was unpacked and focused, and its other systems tested and calibrated.

But, yes, it was everything they said it would be. The American, European and Canadian space agencies held a party in July to release the first colour images. What you see on this page are some of the pictures subsequently published that you may have missed.

The first thing you have to remember about James Webb is that it is an infrared telescope. It sees the sky at wavelengths of light that are beyond what our eyes are able to discern.

Astronomers use its different cameras to explore regions of the cosmos, such as these great towers of gas and dust. The Pillars were a favourite target of Hubble. It would take you several years travelling at the speed of light to traverse this entire scene.

They call this scene the Cosmic Cliffs. It’s the edge of a gigantic, gaseous cavity within another dusty, star-forming nebula, known as Carina.

The cavity has been sculpted by the intense ultraviolet radiation and winds from hot, young stars just out of shot.

From one side of this image to the other is a distance of roughly 15 light years. One light year is equal to about 9.46 trillion km (5.88 trillion miles).

This large galaxy to the right was discovered by the great Swiss astronomer Fritz Zwicky in the 1940s. Its intricate cartwheel structure is the result of a head-on collision with another galaxy. The diameter is about 145,000 light years.

James Webb doesn’t look into only the deep Universe. It probes objects in our own solar system, too. This jewel is the eighth planet from the Sun: Neptune, seen with its rings. The small white dots that surround it are moons, and so is the big “pointed star” above. That’s Triton, Neptune’s largest satellite. The spikes are an artefact of the way James Webb’s mirror system is constructed.

Orion is one of the most familiar regions of the sky. It’s a star-forming region, or nebula, about 1,350 light years from Earth. Here, Webb pictures a feature called the Orion Bar, which is a wall of dense gas and dust.

In one of the big space stories of the year, Nasa ran a spacecraft into an asteroid, called Dimorphos, to see whether it was possible to deflect the path of the 160m-wide rock. It was a test of a strategy to defend the Earth from threatening asteroids. James Webb caught the shower of 1,000 tonnes of debris kicked up on impact.

This was one of the most intriguing Webb images of the year. The “WR” refers to Wolf-Rayet. It’s a type of star, a big one that’s reaching the end of its life. Wolf-Rayets billow huge gaseous winds into space. An unseen companion star in this image is compressing those winds to form dust. The dusty shells you see extend outwards over 10 trillion km. That’s 70,000 times the distance between Earth and our Sun.

M74, nicknamed the Phantom Galaxy, is known for its ostentatious spiral arms. It’s about 32 million light years away from Earth in the constellation Pisces, and lies almost face-on to us, giving Webb the perfect view of those arms and their structure. The telescope’s detectors are particularly good at picking out all the fine filaments of gas and dust.