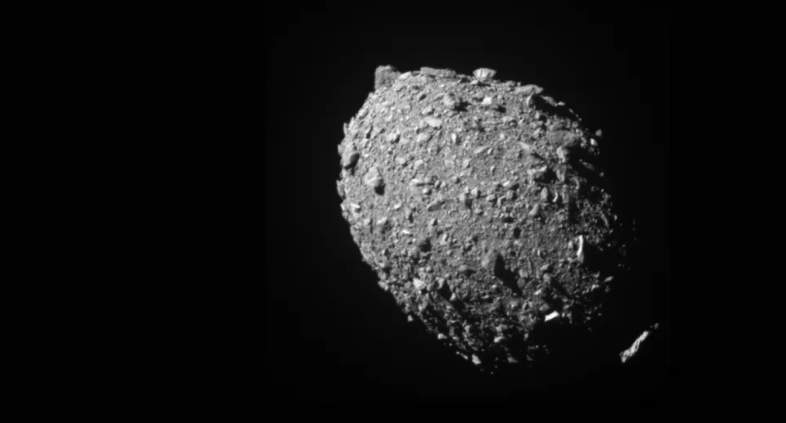 The Nasa probe that struck an asteroid in September to try to deflect its path had a bigger effect because of all the debris it kicked out.

The Dart mission slammed into egg-shaped Dimorphos to demonstrate how hazardous rocks posing a threat to the Earth could be moved out of the way.

It was very successful, but even more so because the impact dug up a million kilograms of surface material.

When this shot out into space it boosted the momentum exchange.

Scientists working on the project have even been able to put a value on the effectiveness, a quantity they call “beta”. It’s 3.6.

In other words, the momentum Dart transferred to Dimorphos was 3.6 times greater than if the half-tonne spacecraft had simply been absorbed by the asteroid and produced no ejecta at all.

“The result of that recoil force is that you put more momentum into the target, and you end up with a bigger deflection.

“If you’re trying to save the Earth, this makes a big difference,” he told reporters, as it would either increase the time available to mount a defence or reduce the size of the needed projectile.

The Double Asteroid Redirection Test (Dart) was a controlled experiment that took place some 11 million km (7 million miles) from Earth.

The space rock orbits a much larger (780m wide; 2,550ft) object called Didymos. Before impact, the time taken for Dimorphos to make one circuit of its sibling was 11 hours and 55 minutes.

The subsequent telescope observations indicated this orbital period was reduced to 11 hours and 23 minutes – a change of 32 minutes.

“We got a lot of bang for the buck,” Dr Andy Rivkin, the Dart investigation team lead, also from JHU-APL, told BBC News.

To give context to the million kilograms of ejected material, he likened it to “six of seven railway cars of gravel”.

“The studies are still ongoing, it may be that this number is a minimum; it could be twice that, it could even be as much as 10 times that according to some estimates.”

Nonetheless, the impact made a pretty mess and telescopes continue to monitor the debris as it trails away from the asteroid for tens of thousands of kilometres.

Studying the light signatures of the Didymos-Dimorphos system both pre- and post-impact has revealed much about the properties of the two asteroids.

US President Joe Biden this week described Dart as one of the US space agency’s three great successes of 2022 – the other two being the recent Artemis-1 Moon mission and the first pictures from the new super space telescope James Webb.

“Dart has been a tremendous success. Of course, one successful mission doesn’t guarantee that Earth is automatically safe from anything that might come our way. But Dart is truly a giant step toward our goal of making asteroid impacts on Earth preventable, and not inevitable.”

The Dart team has been delivering its first major tranche of scientific results to the American Geophysical Union Fall Meeting in Chicago.