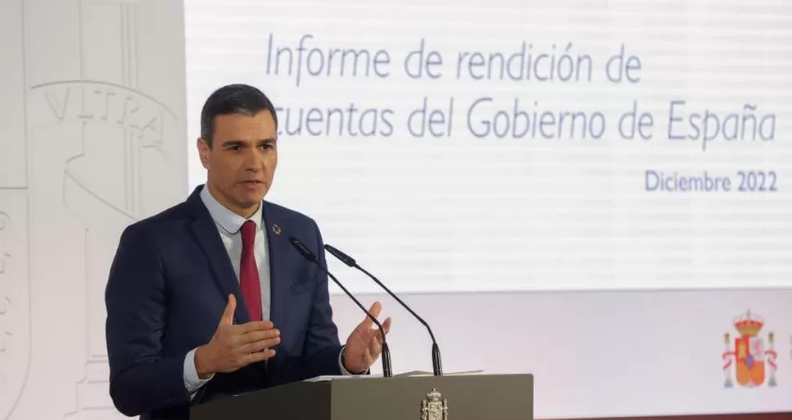 The government would “protect the middle class and workers amid the rise in the cost of living, energy and food”, he said.

The proposals include cuts to VAT and a €200 one-off payment for millions of households on less than €27,000 a year.

Spain has succeeded in bringing down inflation in recent months to 6.8%, the lowest annual rate in the European Union and the lowest figure since the Russian invasion of Ukraine in February 2022. But food price inflation is far higher.

Dubbed as an “anti-crisis” package to mitigate rising prices and boost growth in the year ahead, the latest plans extend for a further six months cuts to tax on gas and electricity brought in by left-wing government.

The one-off payment for households will benefit some 4.2 million households – it was previously limited to families with an annual income of less than €14,000.

Public transport will also continue to be subsidised – with a discount on season ticket prices extended until the first half of 2023 – but a 20-cent-per-litre fuel discount for consumers will be restricted to a few job sectors.

Mr Sánchez also pledged to scrap sales tax for six months on essential food items like bread, milk, cheese, eggs, fruits and vegetables – and bring down taxes on on pasta and cooking oil, from 10% to 5%. A ban on cutting off gas and electricity to households will last until the end of 2023.

EU countries have all acted to protect consumers and businesses from rising prices, with Germany announcing a “defensive shield” package in October worth €200bn to bring down the cost of electricity and gas. Olaf Scholz’s government said it was Berlin’s response to Russia’s “energy war”.

Germany’s so-called price brake caps the cost of units of gas and electricity. Earlier this month EU leaders agreed to cap gas prices from next February if they breached €180.

France, like Spain, has announced a one-off payment to vulnerable families receiving energy vouchers as part of a €45bn package.

In the UK, the government brought in a cap on the price of a unit of energy until April 2023, which will mean the typical household bill for gas and electricity will be £2,500 a year.

Previous newsCovid in China: People rush to book travel as borders finally reopen
Next news The Senegal man on a mission to plant five million trees