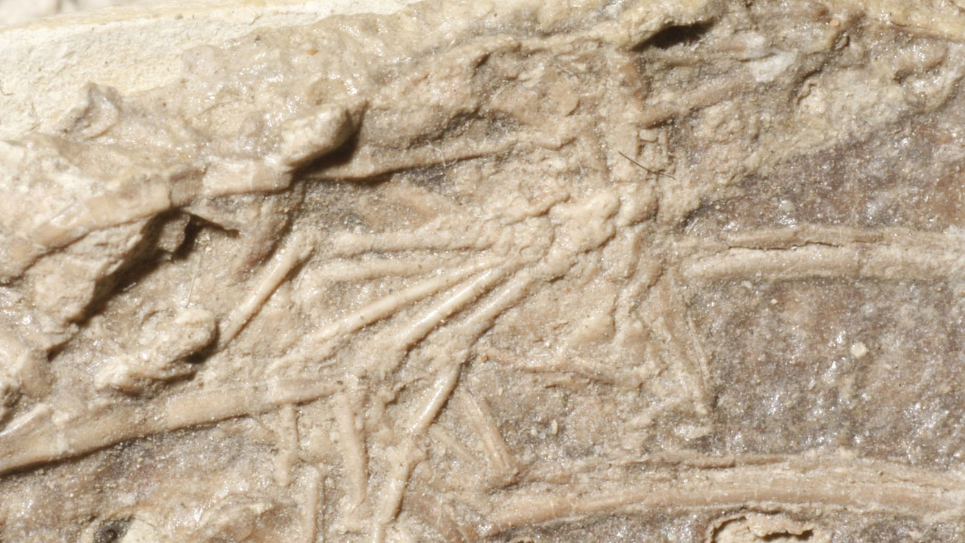 Palaeontologists in the UK analysed fossil remains of a small, feathered dinosaur, known as a microraptor, and found it appeared to have eaten a small mammal about the size of a mouse.

Scientists believe they have uncovered the first known incident of a mammal being eaten by a dinosaur.

The foot of an animal that lived 120 million years ago has been found inside the ribcage of a dinosaur, throwing light on the diet of prehistoric creatures.

Palaeontologists in the UK analysed fossil remains of a small, feathered dinosaur, known as a microraptor, and found it appeared to have eaten a small mammal about the size of a mouse.

The scientists said the discovery, published in the Journal of Vertebrate Palaeontology, is “the first record of a dinosaur eating a mammal”.

A microraptor was about the size of a small cat or crow and would have glided from tree to tree to prey on small animals.

Dr David Hone, from Queen Mary University of London, who is first author on the study, said: “It’s so rare to find examples of food inside dinosaurs, so every example is really important as it gives direct evidence of what they were eating.

“While this mammal would absolutely not have been a human ancestor, we can look back at some of our ancient relatives being a meal for hungry dinosaurs.

“This study paints a picture of a fascinating moment in time – the first record of a dinosaur eating a mammal – even if it isn’t quite as frightening as anything in Jurassic Park.”

Fellow study author Dr Alex Dececchi, from Mount Marty College in the US, added: “The great thing is that – like your housecat, which was about the same size – microraptor would have been an easy animal to live with but a terror if it got out, as it would hunt everything from the birds at your feeder to the mice in your hedge or the fish in your pond.”

Microraptors lived in the ancient forests of what is now China, somewhere between 125 and 113 million years ago.

While it moved on its two legs, experts believe some species may have been capable of guided flight.

The fossil in question was first analysed in 2000, but researchers said the previous team had failed to see the remains of another animal inside the dinosaur.

Microraptor specimens have previously been found with preserved food in their stomachs, such as a bird, a lizard and a fish. However, researchers said it was not clear whether the dinosaurs hunted these animals or found them dead and scavenged them.

Previous newsArmy of islanders to protect gecko the size of a paperclip
Next news Dart: Asteroid deflection experiment boosted by debris