The inside scoop on ice cream innovation 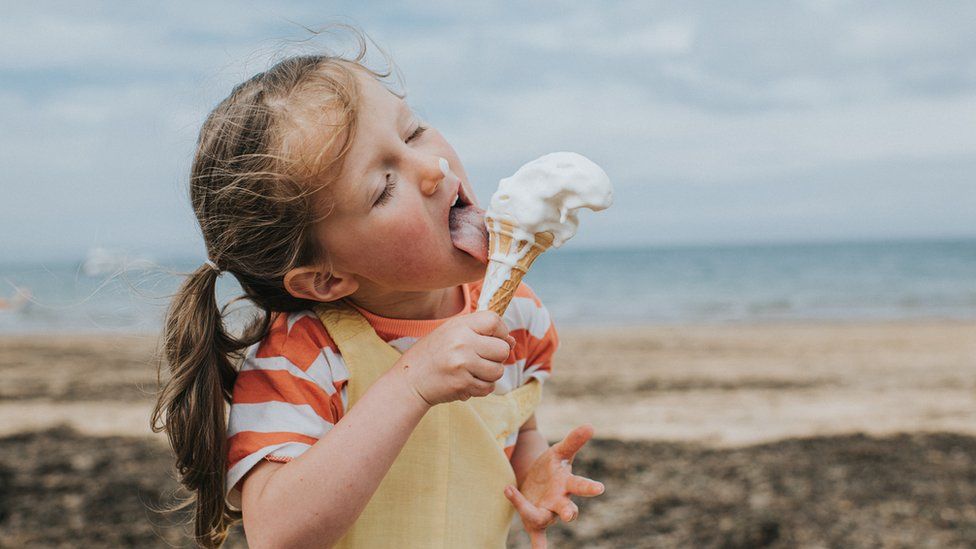 In the summer heat, few things are more satisfying than a cooling ice cream. But did you ever wonder what it takes to make the scoop on your cone?

This traditional treat dates back centuries, but today many frozen desserts are the culmination of months of research and development.

On the outskirts of the Danish city Aarhus is what might be considered ice cream’s answer to Silicon Valley.

Among a cluster of businesses, including dairy producers, engineers and service providers, is a manufacturing plant owned by food packaging giant Tetra Pak.

This place is also home to a product development centre where future recipes and technology are tested out.

“It’s the first step in a long journey to having a product launched,” says Elsebeth Baungaard, portfolio manager at Tetra Pak.

“We’re testing what we will see on the market next summer or two years from now.”

Inside the bright laboratory are steel vats, freezers and a machine turning out oval-shaped ice creams onto a conveyor belt. 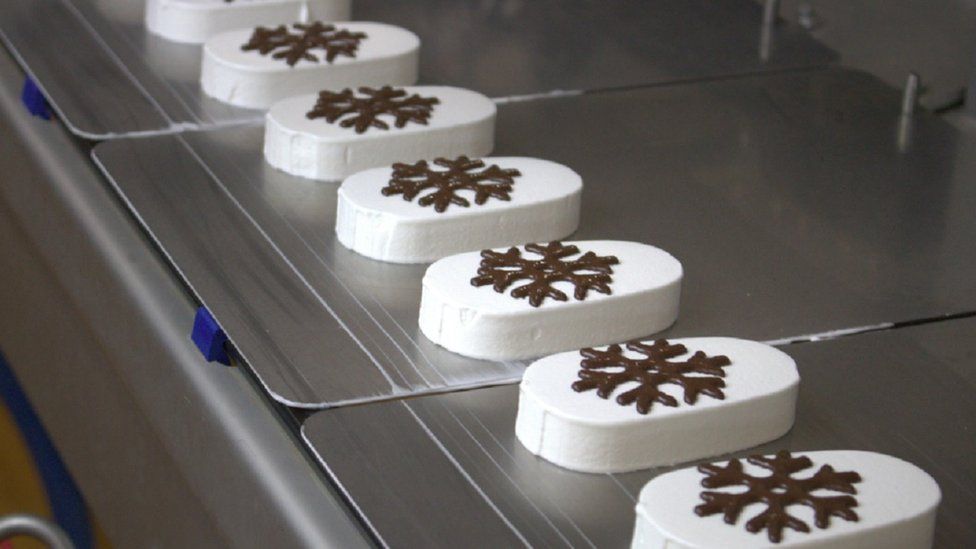 “We see how the mouthfeel is, the texture, and if it’s working,” she explains.

There are also a variety of experts at hand to help out with the process along the way, including specialist “stick inserters”.

The facility allows customers to try new recipes without tying up their own production. New products are released in late spring, then manufacturing ramps up ready for summer.

The US and China are the biggest consumers, and according to Tetra Pak, more than 25 billion litres were eaten worldwide in 2021.

Meanwhile in the UK, sizzling summer temperatures have sent ice cream sales soaring. Data from NielsenIQ shows purchases were 28% higher in the four weeks to mid-August, compared a year earlier. 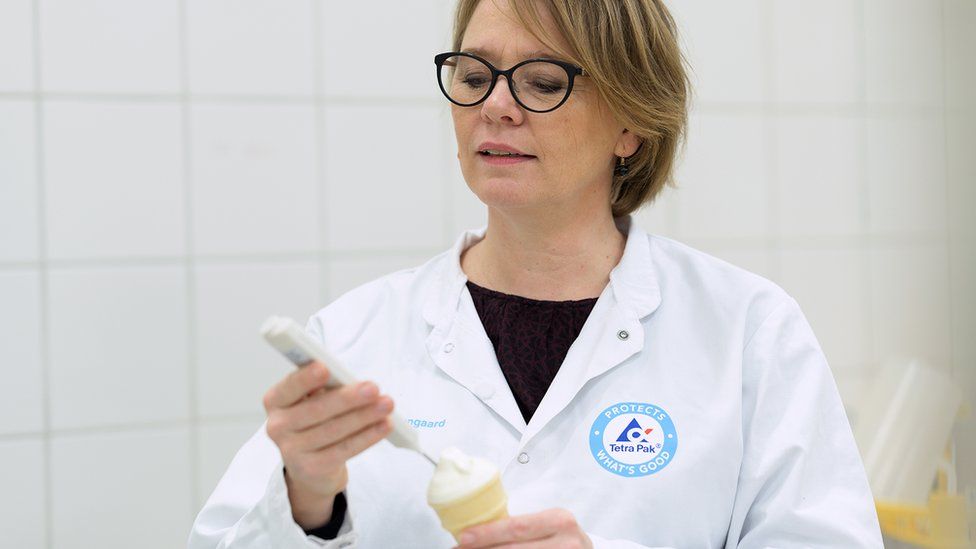 But just how is this delicious treat made?

Production starts with the mix. Milk or water is combined with dry ingredients such as milk solids, sugars and dairy or vegetable fats. The liquid is heated and homogenised, then cooled and “aged”.

Dressed in a white lab coat, Mr Vilsgaard walks me through the process. “We add functional ingredients like flavours and colours, but also stabilisers and the emulsifier.

“They give some viscosity. That is the mouthfeel, when it’s consumed and melting down.”

Next it’s pumped to a continuous freezer. “This is the heart of any ice cream production facility,” he says.

This “small” unit can make 700 litres an hour, but commercial-scale freezers can produce up to 4,000.

Inside a rotating cylinder the mix is rapidly cooled and beaten, while incorporating air. The ice cream emerges slightly soft, so it can be pumped into a tub or mould, then stored at a lower temperature.

While the recipe sounds simple, ice cream has a complex chemistry consisting of ice crystals, air bubbles and fat globules, held in a water and sugar solution. 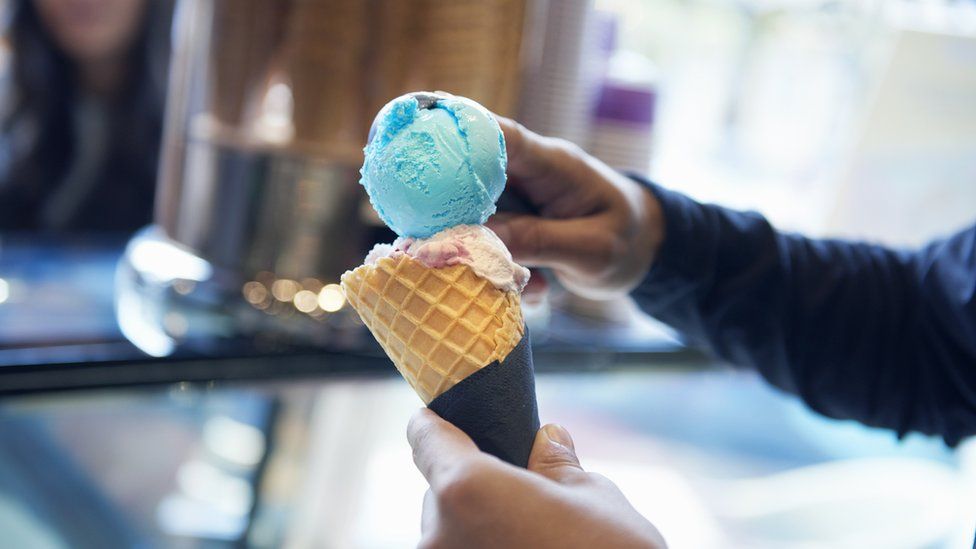 More than 25 billion litres of ice cream were eaten around the world last year, according to Tetra Pak

“It’s one of the few products that holds all three states at once. It’s solid, liquid and gas, all in one,” says Dr Chika Nweke, a fellow in biochemical engineering, who teaches ice cream manufacturing at University College London.

“Normally liquids and oils don’t mix very well. But with the addition of the emulsifier you get the fats in the ice cream sticking together with the liquids,” she says.

Getting the balance right is a precise science and it’s important for the ice cream’s stability.

Recipes have really evolved, says Dr Nweke, and there is a lot of research going into new ingredients, particularly alternatives to lactose or sugars.

However, there are also some rather more unexpected components.

“Up to 50% of it can be air,” says Dr Nweke, revealing that it’s crucial to making the ice cream “scoop-able”.

Commercial production is increasingly automated and at Tetra Pak engineers are tinkering with a new factory line capable of making a million ice creams a day.

The firm estimates that half of the world’s ice cream output is made using its equipment.

Recently it supplied one of the first collaborative robots, known as a cobot, where staff work alongside it filling ice cream bowls.

Designers are also developing special nozzles to make complex shapes like animals, or multiple layers of different flavours, and moulds are 3D printed.

However, keeping ice cream cold is energy-intensive. Elsebeth Baungaard says she and her colleagues are working on a more targeted cooling process that chills specific spots.

Other firms have developed technology that is quite literally “out of the box”.

For example, US firm Cold Snap makes ice cream pods that are only frozen in an appliance when you want to eat it, thereby eliminating the energy consumed by storing it in a freezer.

Back in the lab at Tetra Pak, where future ice creams are tested, I’m keen to get the inside scoop on what’s coming next. 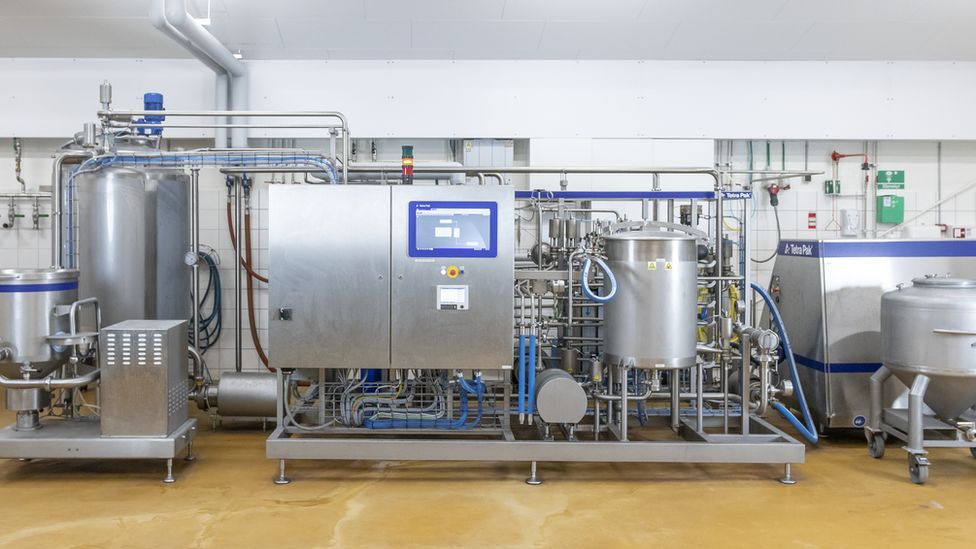 “I’m sorry to say it’s simply shrinking. We are downsizing the volume,” Ms Baungaard replies. “Small cones, small sticks, the bite-size. But the quality will be higher.”

That’s a global trend that Kate Vlietstra, a food and drink analyst from Mintel, also recognises, together with a shift towards more “indulgent” flavours over healthier, low-calorie choices.

“People go for affordable treats,” she says. The firm’s research found that 48% of UK consumers think it has been “easier to justify eating indulgent food or drink since Covid-19”.

Ms Vlietstra thinks concerns about the cost-of-living crisis will have a similar impact. “Ice cream is obviously very affordable, even a premium ice cream, and can offer a great experience at home.”

But while both younger and older consumers buy ice cream regularly, she says it is millennial consumers who are driving interest in more original flavours, including spices like chilli or cardamom.

Dairy still dominates, but plant-based ice cream and sorbets are another growing segment. Other new innovations may soon find their way into our freezers.

Behind Ms Baungaard is a machine with a wheel that can embed chunks of cookie dough or brownie, known as inclusions, into ice creams on a stick.

Another new technique is decorating stick products with patterns or writing. As ice cream samples pass by, you have to wonder if this line of work might be potentially hazardous for dessert lovers.

“It is absolute temptation,” Ms Baungaard says. “But you also get used to it.”