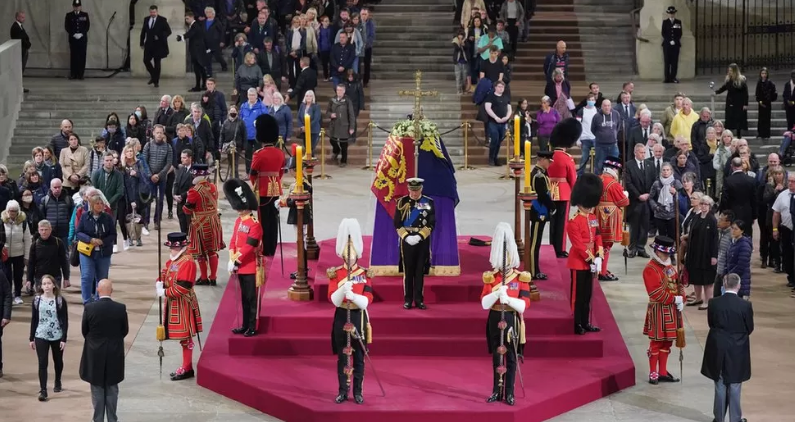 The Queen’s grandchildren, including the Prince of Wales and the Duke of Sussex, will stand vigil around her coffin this evening as she lies in state in Westminster Hall.

At King Charles’ request, Prince Harry will wear military uniform, for the first time since 2020.

Prince Harry has worn civilian clothes at public events since the Queen died.

On Friday evening, the Queen’s children, including the King, stood guard for around 10 minutes.

As they left the hall, members of the public applauded them.

The grandchildren’s vigil is expected to last around 15 minutes.

Prince Harry has not been seen in military uniform since stepping back as a working royal in 2020.

He served two tours in Afghanistan as part of the Army. He now lives in California with his wife Meghan and their two children.

Prince Andrew was also allowed to wear his military uniform as he stood guard on Friday. The 62-year-old stepped down as a working royal in 2019, after a Newsnight interview about his relationship with the late sex offender Jeffrey Epstein.

The prince was later stripped of his military titles.

Before the vigil, the Queen’s youngest child, Prince Edward, thanked the public for their support.

“We have been overwhelmed by the tide of emotion that has engulfed us and the sheer number of people who have gone out of their way to express their own love, admiration and respect to such a very special and unique person who was always there for us,” he said.

“And now, we are there for her, united in grief.”

The Queen will lie in state at Westminster Hall until her funeral on Monday. The queue to see the coffin stretches as far as Southwark Park, with a 16-hour wait time as of Saturday morning. Officials have said if the park reaches capacity, entry will be paused.

At the park, there is a queue for wristbands and join the queue proper. Further along, an LED-display warns people of a 14-hour wait. Many are anticipating a long stay, wearing parkas, hats and big jumpers.

Foreign dignitaries are travelling to London ahead of Monday’s funeral, which will be one of the biggest diplomatic events of recent years, with some 500 heads of state and other dignitaries expected to attend.

Meanwhile, King Charles is now back at Buckingham Palace, having completed a tour of UK’s four nations.

A senior Metropolitan Police officer described the Queen’s funeral as “the largest single policing event [the force] has ever undertaken”.

Events, moments of reflection and public screenings of the funeral are also taking place across the UK this weekend, outside London.

In Blackpool, the tower illuminations – which were changed to red, white and blue for the period of morning – will be switched off at 20:00 on Sunday, when a national one-minute silence will take place.