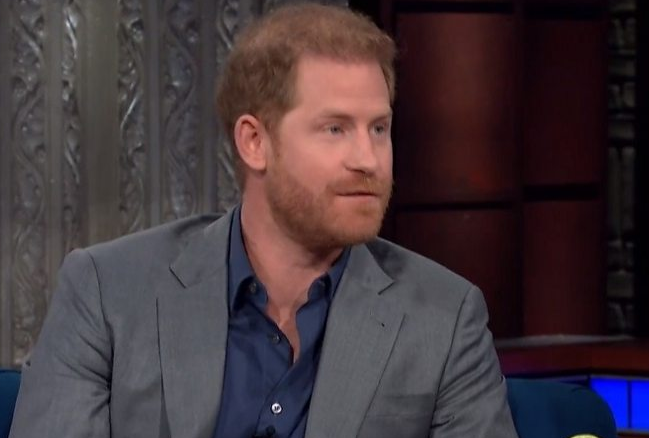 Prince Harry has said claims that he was boasting when he wrote in his new book about killing 25 Taliban fighters in Afghanistan are a “dangerous lie”.

The prince has been criticised for discussing killings in Spare, with some military figures saying it was wrong to refer to the dead as “chess pieces”.

But on US TV, Harry accused the press of taking his words out of context and said the spin endangered his family.

He also defended his remarks, saying he had wanted to reduce veteran suicide.

Spare, which was published on Tuesday, has become the fastest-selling non-fiction book ever in the UK.

Some 400,000 copies of the memoir have been bought, despite many excerpts being leaked in the press ahead of its official release.

In a wide-ranging interview with Stephen Colbert on The Late Show – the first conducted after details from the book were published – Harry suggested there had been attempts to undermine his book, spoke of his fractured relationship with his brother, and attacked the “bigoted” British press.

Harry said writing the book had been a “cathartic” experience and the “most vulnerable I have ever been in my life”, while also leaving him feeling stronger.

But he added: “The last few days have been hurtful and challenging, not being able to do anything about those leaks.”

In his condemnation of the media coverage, Harry claimed outlets had intentionally chosen to “strip away the context” of his account.

“Without a doubt, the most dangerous lie that they have told, is that I somehow boasted about the number of people I killed in Afghanistan,” he said.

“If I heard anyone boasting about that kind of thing, I would be angry. But it’s a lie.

“It’s really troubling and very disturbing that they can get away with it… My words are not dangerous – but the spin of my words are very dangerous to my family. That is a choice they’ve made.”

He said he had wanted to be honest about his experience in Afghanistan, and to give veterans the space to share theirs “without any shame”.

“My whole goal and my attempt with sharing that detail is to reduce the number of [veteran] suicides,” he added.

Harry also claimed Buckingham Palace attempted to undermine the stories told in his memoir, assisted by the British press.

No names were mentioned but host Colbert asked if there had been attempts by the palace to undermine the book.

“Of course, and mainly by the British press,” he replied, without going into more detail.

A Buckingham Palace spokeswoman declined to comment on the claim, and other allegations made by Harry in the book.

When asked about his brother Prince William allegedly pushing him over during an argument, he showed the audience the necklace that was broken in the incident.

“This one – which is now fixed. We’ve got my kids’ heartbeats [engravings of their cardiogram readings] which my wife gave me,” he explained.

In lighter moments during the interview, Harry drank tequila with Colbert and joked that it felt like “group therapy”. He was asked questions about getting frostbite on his penis on a trip to the North Pole and performed a skit introducing the show with Hollywood actor Tom Hanks.

The prince also admitted he watched Netflix series The Crown – the drama based on the Royal Family – and joked about fact-checking it.

On his late grandmother the Queen, he said he most remembers her sharp wit, sense of humour and her “ability to respond to anybody with a completely straight face – but totally joking”.

In Spare, Prince Harry reveals for the first time that he killed 25 enemy fighters during two tours in the Helmand region of Afghanistan.

“They were chess pieces removed from the board, Bad taken away before they could kill Goods.

“I’d been trained to ‘other-ize’ them, trained well. On some level I recognised this learned detachment as problematic.

“But I also saw it as an unavoidable part of soldiering. Another reality that can’t be changed.”

He goes to say he would never forget watching people jump from the World Trade Centre on 9/11 and the war was “avenging one of the most heinous crimes in world history”.

Subsequent media coverage of the comments, which were leaked to the press ahead of the book’s publication, drew criticism from figures in the military.

Ex-army officer Col Richard Kemp, who oversaw forces in Afghanistan, told the BBC he was concerned at references to dead Taliban insurgents as chess pieces, saying such descriptions could give “propaganda to the enemy”.

And ex-colonel Tim Collins, who gained worldwide fame for an eve-of battle speech to troops in Iraq, said: “He has badly let the side down. We don’t do notches on the rifle butt. We never did.”