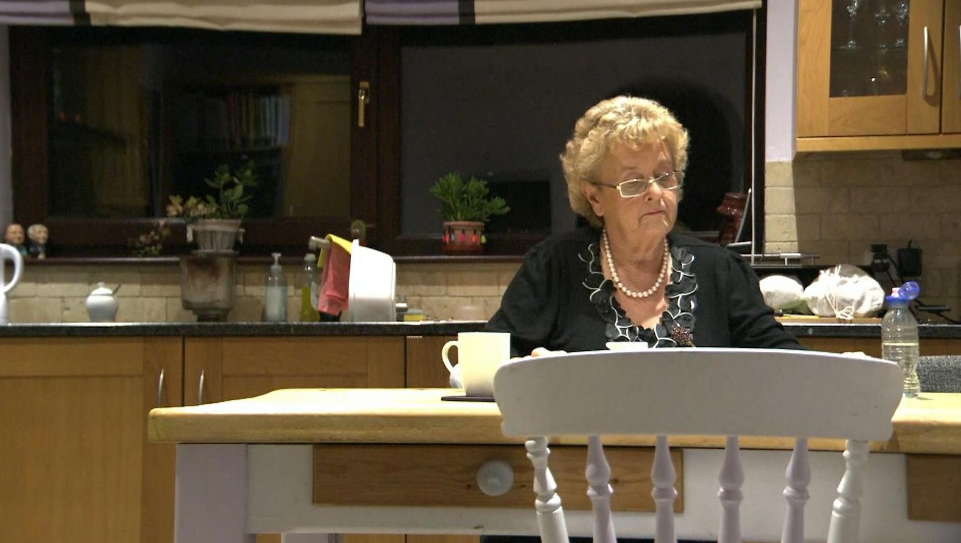 Data shared with Sky News from WASPI found a third of women affected by the changes are in debt, with as many as 80% saying they suffered financial hardship by the delay in finding out the retirement age had changed.

Until suddenly, they learned that they would have to wait a further six years to get their state pension.

An additional six years of working none of them, including Moira Holland, had planned for.

Ms Holland had dedicated 35 years of her working life to the care sector, after gruelling and tiresome work she was ready to retire at 60 and was counting down the days until she would be able to enjoy her retirement.

Vigorous work had also taken its toll on her mental and physical health, but knowing she was a year from retiring got her through the tough days.

The devastating blow came via a letter, informing her a year before she was due to say goodbye to work, that she would have to work for six more years and retire at 66 instead.

“It was devastating, absolutely devastating,” Ms Holland tells Sky News. “We thought at 60 years old we’d get our pension.

“So I was all set up to retire, have a nice life, get my pension, be able to manage well, and then to get the letter to say no – ‘you’ve not got to work one more year, you’ve got to work six more years till you’re 66’ – was terrible, absolutely terrible.”

Ms Holland says the last-minute nature of the news has impacted her health.

“Also, lots of my friends died at 60, and they never got their pension. So on top of the health problems, I’m thinking, am I ever going to see this pension? Am I going to live to be 66? Nobody knows. So really, it was very, very heart-wrenching.”

Why was the state pension age changed?

The state pension age was aligned to match men in a move praised for improving gender equality.

But campaigners from Women Against State Pension Inequality (WASPI) have long argued they were not given sufficient warning of the change, leaving millions with insufficient time to prepare or make other financial arrangements.

What has the impact been?

Exclusive data shared with Sky News from WASPI found a third of women affected by the changes are in debt, with as many as 80% saying they suffered financial hardship by the delay in finding out the retirement age had changed.

So far, 220,190 women impacted have died without answers.

Campaign chair of the voluntary organisation, Angela Madden, accuses the government of not meeting with members since 2016.

She tells Sky News: “The government has never really engaged with us. Guy Opperman was the last pensions minister to meet with the WASPI campaign in 2016, which really is atrocious given that we have lost so much through government incompetence.

“It is up to the government to change the state pension age if they must.

“There were probably reasons they did that, but not to have the courtesy to give us any notice so that we can do anything about it is absolutely disgraceful, and they should be ashamed of themselves.”

‘I wasn’t given the opportunity’

Last year, the Parliamentary Ombudsman found the women should have been given at least 28 months’ more notice.

It said the Department for Work and Pensions should have written individual letters to the affected women.

Ms Madden was also personally affected by the maladministration.

“Some women, myself included, chose to stop working before we knew about the state pension age increasing because our parents or members of our family required care,” she says.

“I made the choice to leave a full time job and spend some time with my mother in her final days.

“Looking back, if given an earlier warning, I would have probably combined caring for my mother and working part-time. I wasn’t given the opportunity to make that choice.

“Had the government done what they should have done and told us as soon as they knew about the law changing, then we would have all known about it well in advance and been able to make the right decisions.”

What has the government said?

A Department for Work and Pensions spokesperson: “We support millions of people every year and our priority is ensuring they get the help and support to which they are entitled.

“The government decided over 25 years ago it was going to make the state pension age the same for men and women as a move towards gender equality.

“Both the High Court and Court of Appeal have supported the actions of the DWP under successive governments dating back to 1995 and the Supreme Court refused the claimants’ permission to appeal.”

Previous newsAirport strikes could go on for months, says PCS union boss
Next news Boxing Day shoppers up by nearly 40% but still lower than before pandemic