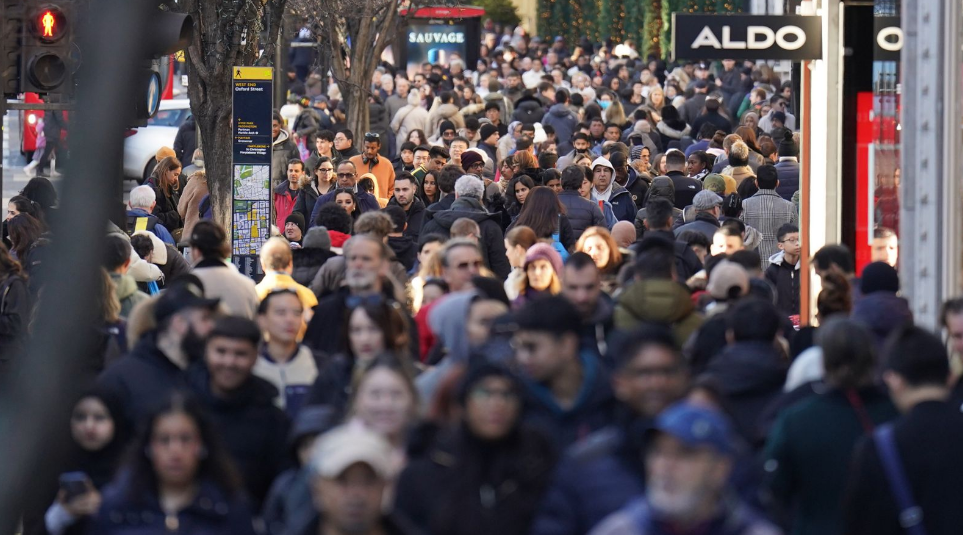 Footfall was 18.2% lower than Boxing Day in 2019 across all UK retail destinations, showing there were still fewer shoppers turning out to high streets, shopping centres and retail parks than before the pandemic.

The number of Boxing Day shoppers rose by nearly 40% compared to last year but remained below pre-pandemic levels as cost of living pressures weigh on consumers.

More shoppers were drawn to Boxing Day sales this year than last in all retail settings across the UK, according to data from retail analytics company Springboard.

Springboard’s data shows Boxing Day footfall in the UK was 38.8% higher than in 2021 by the end of the day.

By midday on Boxing Day, the greatest increase was recorded in Northern Ireland where five times as many people attended 26 December sales.

Footfall was 18.2% lower than Boxing Day in 2019 across all UK retail destinations by the end of the day, showing there were still less than shoppers than before the pandemic.

Diane Wehrle, Insights Director at Springboard, comments: “Boxing Day was far from doom and gloom this year; there was a better performance on Boxing Day morning with a +50.1% increase in footfall, however footfall remained strong overall, with a +38.8% increase across the UK versus 2021.

“These positive results come in line with the first Christmas post-pandemic without any formal social restrictions and in spite of the cost of living crisis and the rail strikes, which inevitably affect retailers negatively.

“High streets came out on top overall with a +44.1% increase, while Central London defied all expectations with an overall climb in footfall of +66%, decreasing the gap from pre-pandemic 2019 Boxing Day levels to just -7.8%, which comes as very welcome and promising news for retailers in the capital.”

Before Christmas, footfall had been lower as rail strikes and snow deterred shoppers, official figures showed.

In the week up to 18 December, overall footfall dropped by 6% on the previous week and 23% of the 2019 level, the Office of National Statistics (ONS) said, quoting Springboard data.

High streets were the worst affected, with footfall down 12% during the seven days up to 18 December, from the week earlier.

While snow has thawed, rail strikes are continuing and will last until 29 December. They will begin again in the new year on 3 to 7 January as the National Union of Rail, Maritime and Transport workers seeks improvements in pay and guarantees on jobs and conditions.

There was a surprise fall in retail sales recorded in November as shoppers remained cautious due to increased prices from inflation in the run-up to Christmas. Inflation stood at 10.7% in November.

The Office for National Statistics reported a fall in sales volumes of 0.3% compared to October when the effects of fuel sales were excluded.

Growth of 0.3% was expected by economists given reports of healthy interest, and spending, on goods during the key bargain-hunting period of Black Friday.