Backlash to Braverman builds as foreign secretary defends her re-appointment 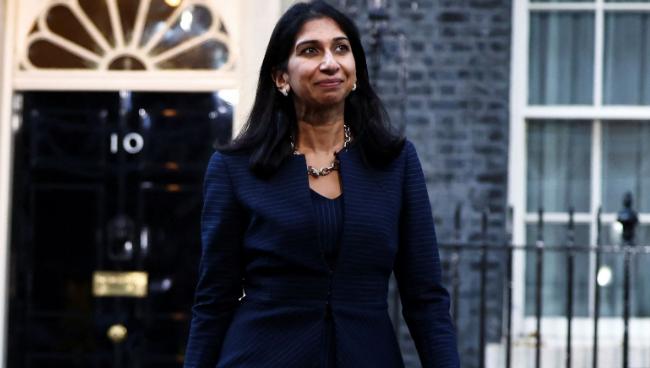 The return of the home secretary in Rishi Sunak’s new cabinet has raised eyebrows from opponents, But James Cleverly tells Sky News she has ‘a very clear agenda’ for the role.

James Cleverly has defended the re-appointment of Suella Braverman as home secretary, saying she has “a very clear agenda” that the prime minister wants to see delivered.

Ms Braverman resigned from the role seven days ago, having breached the ministerial code by sending secure information from her private email, and left with scathing remarks about Liz Truss’s government.

But she was hired back by new PM Rishi Sunak yesterday as he chose a number of familiar faces to make up his cabinet.

Labour attacked the move, accusing Mr Sunak of “putting party before country” by appointing Ms Braverman to win over the right wing of his party.

But Mr Cleverly said she had “very, very clear ideas about how we improve the performance of the Home Office” and had apologised for the mistakes of the past.

“Suella made a mistake,” he told Sky News. “She has said herself that she made a mistake. She’s apologised for that mistake and she stood down at the time.

“She has shown a willingness to take responsibility for what happened – but ultimately [the PM] has decided that he wants to see the agenda that she has set out, that very important crime fighting agenda, back in the heart of government.”

Labour’s shadow home secretary Yvette Cooper pointed to Mr Sunak’s speech on the steps of Downing Street after becoming prime minister, saying his government would have “integrity, professionalism and accountability at every level”.

“Yet he has just appointed Suella Braverman to be home secretary again a week after she resigned for breaches of the ministerial code, security lapses, sending sensitive government information through unauthorised personal channels, and following weeks of non-stop public disagreements with other cabinet ministers,” she added.

“Our national security and public safety are too important for this kind of chaos. We don’t just need a new cabinet, we need a general election and a fresh start with Labour.”

Meanwhile, questions remain over whether the new prime minister will go ahead with the planned economic statement at Halloween, organised in response to the market turmoil caused by Ms Truss’s tax-slashing mini-budget last month.

Chancellor Jeremy Hunt, who has stayed in post at the Treasury, reversed most of her policies when he came into his role just over a week ago.

But the Commons statement set for 31 October was due to provide longer term plans to fill to fiscal blackhole the government has been left with after Ms Truss’s short tenure.

Foreign Secretary James Cleverly told Sky News this morning he had not had “specific confirmation of dates” regarding the statement and Mr Sunak will “want to take some time to work on the detail” alongside his chancellor.

But he added: “We know it needs to come soon. We know people want certainty.

“We know people want a clear idea of the government’s plans [but] whether it happens exactly on that day, I’m not able to confirm.”

Previous newsRishi Sunak’s speech offered crucial hints at what is to come | Beth Rigby
Next news WhatsApp down: Thousands of people report being unable to use messaging app