Why do humans love cats, according to science, and is it healthy? 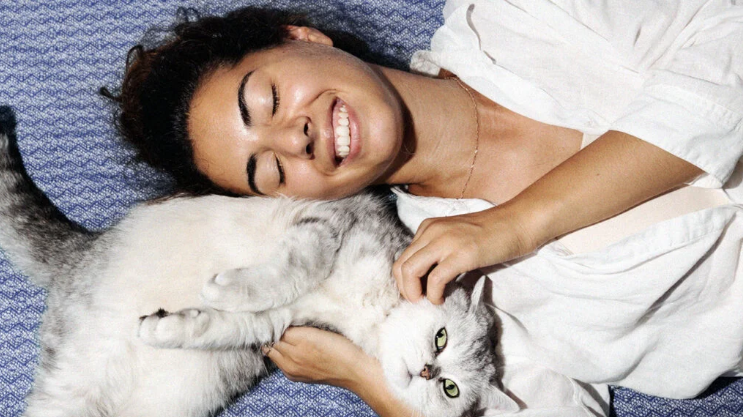 There are some 85 million cats in American households, many of which are cherished family members. What is behind felines’ appeal to humans? Could it be their apparently choosy nature? And what is their effect on human health? This Special Feature investigates.

When people say they love cats, that love can be intense. For many, a feline friend is a singularly trustworthy confidant and a comforting presence in times of loneliness.

Are such close relationships, however, healthy on a psychological or physical level?

Geneticists, infectious disease experts, psychologists, and others have put forward several theories as to why cats resonate so strongly with some people, and what effect felines may have on their humans’ health.

According to DNA analyses, the ancestor of today’s domestic cat was the African wildcat, Felis silvestris lybica, living in the Fertile Crescent, the intersection of ancient Mesopotamia, Egypt, the Levant, and Persia.

While it appears likely our connection with felines began about 9,500 years ago in the Near East, the earliest evidence of a mutual relationship between cats and humans dates to 5,300 years ago in the agricultural village of Quanhucun, China.

“Cats were domesticated as commensals: They approached human settlements because there was food — concentrated rodents thriving on grain accumulations. They adapted to this specific human environment, which represented an evolutionary advantage for them. Humans had a real interest to have cats around. They were just happy with the cats feasting on the rodents that destroyed their cereals.”

One study found that there were at least 13 feline genes that signaled cats’ transition “from feral to friendly.” The genes relate to cognition and behavior, and may have strengthened felines’ ability to learn based on food rewards, and to feel less fearful of people.

The widespread geographic proliferation of cats probably occurred during the Middle Ages, according to a studyTrusted Source for which Dr. Geigl was the principal investigator.

The National Institutes of Health (NIH) estimateTrusted Source that there are about 85 million cats living in the U.S. There are also about 70 million unowned wild and feral cats in America.

What people love about cats

Dr. Pendry speculated to MNT that felines’ discriminating behavior may be irresistible to humans:

“The subtle and somewhat unpredictable responses cats give us, give us the perception that we are chosen — or perceived as ‘special’ when a response from a cat does occur. I also believe that because the response tends to take a little bit more time to emerge, we are captivated by a desire to know what the cat will do.”

“And because the nature and timing of their actions are less predictable, we may remain captivated, almost in an addictive kind of way — you can’t rip yourself away because that purr, that special rub may be just around the corner,” said Dr. Pendry.

It is also possible, some research suggests, that we cannot help but find felines to be cute due to features they share with human babies. We instinctively respond to the large eyes and playful behavior, an evolutionarily beneficial response that has helped ensure we care for our young.

No discussion of cats’ appeal can exclude mention of their often hilarious comedic prowess. Kittens, especially, invest unbridled energy — and much less planning — into their play. Mature cats can be just as entertainingly ridiculous.

Sometimes it is high-speed hijinks, and other times it is endearingly weird — is there some reason there are nine hair ties hidden under one’s office rug?

Cats have an undeserved reputation for being mysterious and aloof due to the unique and sometimes subtle ways in which they express their feelings.

A cat’s face may seem attractive — or grumpy, as the case may be — but it is actually fixed and largely expressionless. Nor do their tails wag to signal excitement or pleasure. Recent researchTrusted Source suggests their dispositions may nonetheless be closer to eager-to-please dogs than many realize.

Likewise, cat vocalizations, of which there are many, range from meows to hisses, to nick-nack-ing at birds through a window, to the blood-curdling, deep yowls that presage a fight.

Some vocalizations are clearly meant to communicate with humans — say, meowing at breakfast time. However, cats mostly seem to “talk” or mutter to themselves.

Even so, felines have plenty of ways to signal their feelings through other behaviors.

For people they care for or in whom they are interested, cats will often offer to head-bump outstretched fingers or a pant leg. This behavior is known as “bunting” and it accomplishes two things.

First, they are leaving behind pheromones secreted from cheek glands, marking you as theirs. Second, particularly in the case of pant legs, they are gathering olfactory intel regarding your interactions with other animals if they find you worthy of investigation.

People often assume that a purr is a sure sign of pure happiness, but it is not. Cats in distress may also purr. Some experts suggest a cat may deploy the soothing sound to comfort themselves in difficult moments.

Some have hypothesized that a purr may even have healing properties.

Purring occurs on both inhaling and exhaling, producing a thrumming 20 to 150 Herz hum. It remains unclear exactly how they do it.

Often a cat’s presence is the best signal that it is fond of you — this is especially true of timid cats. A feline will stay away from a person in whom they are not interested or whom they feel anxious about.

Feline eyes are always fairly large, but when they get very big — sometimes with their irises dilated — they may signal a hyper-excited state or a perceived threat.

Researchers have recently confirmedTrusted Source what some cat lovers have long suspected: To make peace with a cat, offer them a very slow blink. It is as if to say “I feel safe enough with you to close my eyes, and you should feel the same.”

While they are made from keratin, the same substance as hair, cats’ whiskers are far more than that. Whiskers are specialized touch organs, each with from 100 to 200 nerve cells that provide the cat information about everything they brush against.

Whiskers can also signal a feline’s mood. When a cat is relaxed, they stick out from the side of the face. When a cat is happy or excited — while being gently petted, for example — they point forward in a tight little arc of pleasure. Whiskers move back against a cat’s face when alarmed.

Researchers have found that living with a cat offers health benefits physically and, especially, psychologically, assuming you are not allergic to cats.

A 2009 studyTrusted Source, for example, found that people who had owned a had a lower risk of dying from a heart attack than people who had never owned a cat.

In a 2011 survey conducted by the United Kingdom feline welfare charity Cats Protection, 93.7% of respondents said owning a cat has been beneficial for their mental health.

And one study showed that living with multiple pets, including cats, can reduce a child’s likelihood of developing allergiesTrusted Source.

Some have expressed concern regarding a potential zoonotic infection of cat owners by Toxoplasma gondii, a single-celled microscopic parasitic organism often found in cat feces.

Some have even suggested that T. gondii can be a trigger for schizophrenia.

In 2016, researchers fact checkedTrusted Source T. gondii’s association with schizophrenia and major depression, poor impulse control — including suicidal behavior and criminality — personality, and neurocognitive performance. They found there was little evidence that links T. gondii to any of these issues.

According to Dr. Pendry, cats “give us attention, relieve our loneliness, provide comfort, fun, and play, affection, and special unique permission to stroke/ pet them and keep them on our laps, which we know releases oxytocin, which in turn suppresses the production of cortisol, a stress hormone.”

“And I believe, the benefits are mutual,” she added. “As long as the affection we give them is welcomed, they derive similar comforts and a sense of belonging from us.”

Previous newsHumans continue to evolve with the emergence of new genes
Next news IBD: Common red food coloring may cause intestinal inflammation, colitis