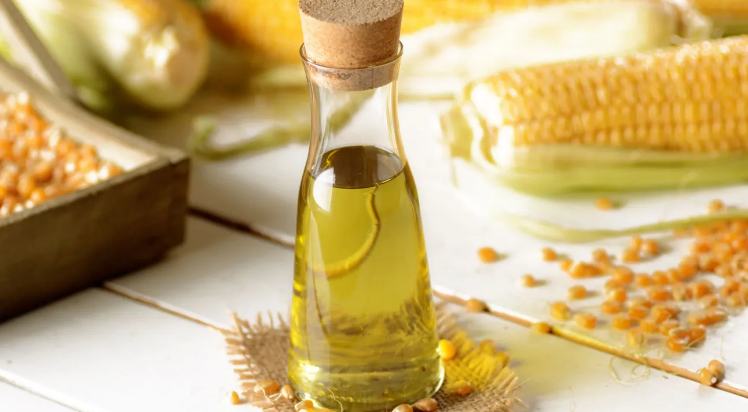 It also has many other applications and is commonly used for industrial purposes or as an ingredient in cosmetics.

Corn must go through a complex refining process to produce corn oil.

This process gives the oil many unique characteristics, though not all of them are positive.

This article reviews corn oil, including its nutrition, uses, and production, as well as potential benefits and downsides.

Calories: 122
Fat: 14 grams
Vitamin E: 13% of the Reference Daily Intake (RDI)
During the process of extracting corn oil from corn, many vitamins and minerals are lost. Still, the oil has a fair amount of vitamin E.

Vitamin E is a fat-soluble nutrient that acts as an anti-inflammatory antioxidant in your body.

Antioxidants are compounds that neutralize molecules called free radicals, which can increase your risk of conditions like heart disease, type 2 diabetes, and some cancers when their numbers get too high (2Trusted Source, 3Trusted Source, 4Trusted Source).

Polyunsaturated fats include omega-6 and omega-3 fats. The latter are associated with decreased inflammation and better health when they’re present in your body at a ratio of about 4:1 of omega-6 to omega-3 (Trusted Source).

However, many people’s diets contain too many inflammatory omega-6 fats and not enough anti-inflammatory omega-3 fats (Trusted Source).Corn oil has an omega-6 to omega-3 ratio of 46:1, which can contribute to this imbalance

Corn oil is 100% fat and provides 122 calories per tablespoon (15 ml). It’s mostly made of polyunsaturated omega-6 fats and contains some vitamin E.

Uses and how it’s made

Corn oil has a variety of uses, both in cooking and non-cooking applications.

It’s used as an industrial cleaner and lubricant, as well as to make fuel for gasoline- and diesel-powered engines. Plus, it’s included in many cosmetic products, liquid soaps, and shampoos.

Still, its best known as a frying oil. It has a very high smoke point (the temperature at which oil begins to burn) of about 450°F (232°C), making it ideal for deep-frying foods to perfect crispness without burning them .

Corn oil is widely available, making it a popular choice for home cooks. It can be purchased at almost any grocery store and used in many ways, such as for:

sautéing and frying
salad dressings and marinades
cakes, bread, and other baked goods

With a fat content of only about 1–4%, corn is not a naturally oily food. Therefore, it must go through an extensive process to extract the oil (9Trusted Source, 10).

The kernels must first be mechanically pressed to separate the oil. The oil then goes through a series of chemical processes that remove impurities, as well as undesirable smells and tastes .

The following processes that are involved remove many vitamins and minerals and may even introduce harmful substances:

Hexane extraction. Corn is washed with a solution containing a chemical called hexane that causes it to release oil. Hexane has been shown to negatively impact the nervous system in humans and animals (11Trusted Source).
Deodorization. Undesirable smells and tastes are removed from the oil, along with some healthy compounds. Prior to this step, the smell and taste of corn oil make it unsuitable for cooking .
Winterization. Waxes and saturated (solid) fats are removed from the oil so that it stays liquid at low temperatures. Without winterization, many vegetable oils would solidify in cold temperatures

Corn oil must go through an extensive refining process to be extracted from corn. It’s most commonly used as a frying oil due to its high smoke point but also has industrial applications.

Corn oil appears to have beneficial health effects in some studies.

It contains compounds that may promote heart health, such as phytosterols, vitamin E, and linoleic acid.

Corn oil is full of phytosterols, which are plant-based compounds with a similar structure to the cholesterol found in animals.

However, more human research is needed to understand the potential anticancer properties of beta-sitosterol.

Additionally, phytosterols are known to help block your body’s absorption of cholesterol. Thus, they may help decrease high cholesterol levels, which are a risk factor for heart disease

Because corn oil contains heart-healthy compounds, such as vitamin E, linoleic acid, and phytosterols, it may lower your risk of heart disease.

Vitamin E is a powerful antioxidant, so a diet high in this nutrient may prevent oxidative damage to your heart and blood vessels caused by excess free radicals (23Trusted Source).

Additionally, in a review of studies in more than 300,000 people, swapping 5% of total calories from saturated fat to linoleic acid was associated with a 9% lower heart attack risk and a 13% lower risk of heart-related death (24Trusted Source).

Keep in mind that some of these studies were funded by ACH Food Companies, Inc., the producer of Mazola corn oil. The results of health studies funded by food corporations are often skewed in favor of the company’s products

Corn oil is high in anti-inflammatory phytosterols and other compounds that may help reduce certain heart disease risk factors, such as LDL (bad) cholesterol and total cholesterol.

Corn oil has some significant downsides that may outweigh its potential health benefits.

Corn oil is high in linoleic acid, an omega-6 fat that has been linked to improved health in some studies (24Trusted Source, 29Trusted Source).

However, omega-6 fats can be harmful if they’re consumed in excess. According to most research, your body needs to maintain an omega-6 to omega-3 ratio of about 4:1 for optimal health (6Trusted Source).

Most people consume these fats in a ratio of about 20:1, eating far more omega-6 fats than omega-3s (6Trusted Source).

A proper balance of these fats is important, as omega-6 fats tend to be pro-inflammatory — especially when there are not enough anti-inflammatory omega-3 fats present (Trusted Source).

Limiting corn oil and other foods high in omega-6 fats while increasing your intake of foods rich in omega-3 fats, such as fatty fish and chia seeds, may help decrease inflammation and promote overall health

Made with genetically modified corn

Most of this corn is modified to be resistant to insects and certain weed killers like glyphosate (37).

Many people are concerned about the effects of glyphosate buildup in the body from eating glyphosate-resistant GMO foods that have been treated with large quantities of the herbicide.

In 2015, glyphosate was classified as a “probable carcinogen” by the World Health Organization (WHO). However, much of the available test-tube and animal evidence does not support this (38Trusted Source, 39Trusted Source, Trusted Source).

While several short-term studies have concluded that GMO foods are safe, long-term research is lacking. GMO corn has only been available since 1996. As such, its long-term impact on overall health is unknown (Trusted Source).

If you’re concerned about GMO foods and would like to avoid them, seek out products that have been verified by the Non-GMO Project.

Corn oil is a highly refined product. It must go through an extensive process to be extracted from corn and made edible.

This process causes corn oil to be more likely to become oxidized — meaning that at a molecular level it begins to lose electrons, becoming unstable (Trusted Source).

High levels of oxidized compounds in your body can increase your risk of certain diseases (Trusted Source, Trusted Source).

In fact, the beta-sitosterol in corn oil becomes oxidized as it’s heated over long periods, such as in a deep fryer. However, the antioxidant vitamin E helps slow this process down (Trusted Source).

Heating corn oil also produces the antinutrient acrylamide, a highly reactive compound that has been linked to problems with nerve, hormone, and muscle function.

Corn oil is high in inflammatory omega-6 fats and made from GMO corn. It’s also highly refined and produces harmful acrylamide when heated.

Corn oil contains some healthy components like vitamin E and phytosterols, but overall it’s not considered a healthy fat.

That’s because it’s highly refined and high in inflammatory omega-6 fats that should be limited in a typical Western diet.

There are many healthier alternatives to corn oil. For example, extra virgin olive oil comes from naturally fatty olives that can simply be pressed to extract oil, requiring no chemical processing (Trusted Source, Trusted Source).

Unlike those of corn oil, the health benefits of olive oil have been thoroughly researched for decades. It may protect against heart disease, cancer, osteoporosis, obesity, and type 2 diabetes (Trusted Source, 54Trusted Source).

You can use olive oil in place of corn oil in salad dressings and cooking applications, such as sautéing and pan frying.

For higher-heat cooking methods like frying, swap corn oil for coconut oil, a healthy saturated fat that is more stable at high temperatures and resistant to oxidation (Trusted Source).

Because healthier alternatives, such as olive and coconut oils, are widely available, corn oil should be limited whenever possible.

Corn oil is not the healthiest choice for cooking oil. Healthier alternatives include olive and coconut oils.