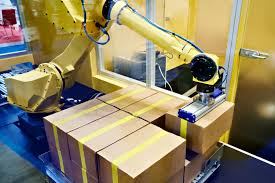 A new ‘pinch-grasping’ robot system unveiled by Amazon shows the machine deftly grabbing and stowing a wide range of items – moving at a rate of 1,000 items per hour, which is far faster than a human worker could.

Although humans don’t spend much time figuring out how to grasp a bottle from the back of the fridge that might fall and break open, teaching a robot to deal with cluttered spaces, locate a wide range of items and deftly move them is a challenge for the retail giant’s robotics division.

In a video posted to Amazon’s science blog, the robot prototype can be seen using its finger-like pinchers to move and stow 19 items – including small bags, a broom, a spice container and a small box – in 60 seconds.

This is an improvement over existing warehouse robotic systems that use vacuum-like suction cups to lift and move items. Some packages, like books which may flop open if only grasped on one side, require other innovations. That’s where the the pinch-grasping technology, which mimics human hands, comes in.

‘In robotics, we don’t have the mechanical ability of a five-finger dexterous hand,’ Aaron Parness, a senior manager for applied science at Amazon Robotics AI, said in a statement.

‘But we are starting to get some of the ability to reason and think about how to grasp. We’re starting to catch up. Where pinch-grasping is really interesting is taking something mechanically simple and making it highly functional.’

Amazon uses a combination of multiple cameras, motion algorithms and machine learning models to give the robots a three-dimensional understanding – so that they are able to correctly grasp different items without causing damage, dropping anything or bumping them into other items.

In preliminary tests, the pinch-grasping robot achieved a 10-fold reduction in damage on certain items, including books, without having to reduce its speed in comparison to robots that use suction cups.

‘They not only showed they could grip a lot of objects, but they did it really fast — they got to 1,000 units per hour,’ said Parness, who oversees the project.

The robot’s ability to carefully and quickly move a wide variety of objects make it a suitable candidate for wider deployment in Amazon’s fulfillment centers. The company has 110 active fulfillment centers in the U.S. and 185 globally.

Amazon founder Jeff Bezos in 2019 predicted that commercial robots able to grasp items as well as human hands would be available within ten years.

Warehouse automation isn’t a new topic, as the company’s own internal research earlier this year estimated that it could run out of workers to hire in the U.S. by 2024 if it did not make a series of major changes that included more automation.

In addition, the current push for unionization at two different fulfillment centers has led some labor activists to speculate that Amazon may speed up its automation efforts in response.

Ultimately, Amazon may need to develop a model that combines elements of the pinch-grasping technology and the suction – because the latter is more suited to flat items such as cards.

‘Not only are we able to build robust three-dimensional models of the scene, we’re able to identify a specific item in the scene and use machine learning to know how best to pick it up and to move it quickly and without damage,’ Siddhartha Srinivasa, director of Amazon Robotics AI, said in a statement.

Previous newsShoppers paying record 10.6% more for food than a year ago
Next news Blood test could identify long-COVID risk and allow early intervention