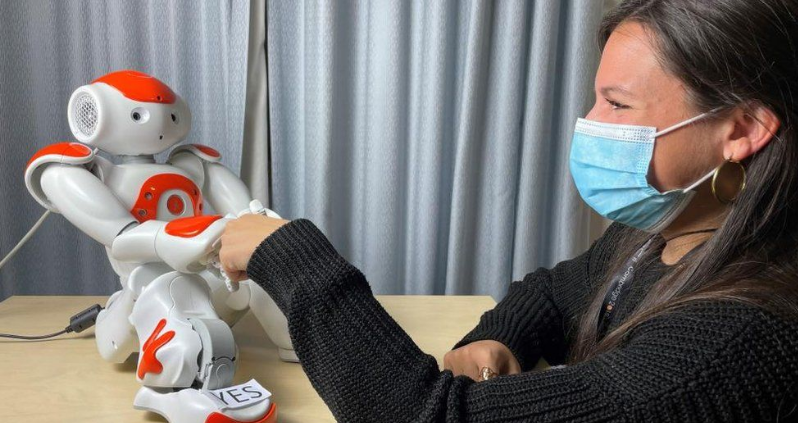 Robots could help identify mental wellbeing issues in children, a study has suggested.

Cambridge University researchers used a child-sized humanoid robot to complete a series of mental health questionnaires with 28 children aged between eight and 13.

They found some children were more willing to confide in the robot than in person or in an online questionnaire.

The researchers said they hoped to expand their study further.

They are presenting the results at a conference in Italy.

Micol Spitale, one of the authors of the study, said they did not have any intention of replacing psychologists or other mental health professionals with robots “since their expertise far surpasses anything a robot can do”.

But, their research suggested robots “could be a useful tool in helping children to open up and share things they might not be comfortable sharing at first”, she said.

During the study, each child took part in a one-to-one, 45-minute session with a Nao robot – a humanoid robot about 60cm (24in) tall.

A parent or guardian, as well as members of the research team, observed from an adjacent room.

Before each session, the children and their parent or guardian completed standard online questionnaires to assess the child’s mental wellbeing.

Participants then interacted with the robot by speaking with it, or by touching sensors on the robot’s hands and feet.

The research team said all of the participants had told them they enjoyed talking to the robots, and some shared information which they had not shared either in person or in the online questionnaire.

“Since the robot we use is child-sized, and completely non-threatening, children might see the robot as a confidante – they feel like they won’t get into trouble if they share secrets with it,” said PhD student Nida Itrat Abbasi.

The results are being presented at the 31st Institute of Electrical and Electronics Engineers International Conference on Robot and Human Interactive Communication in Naples.