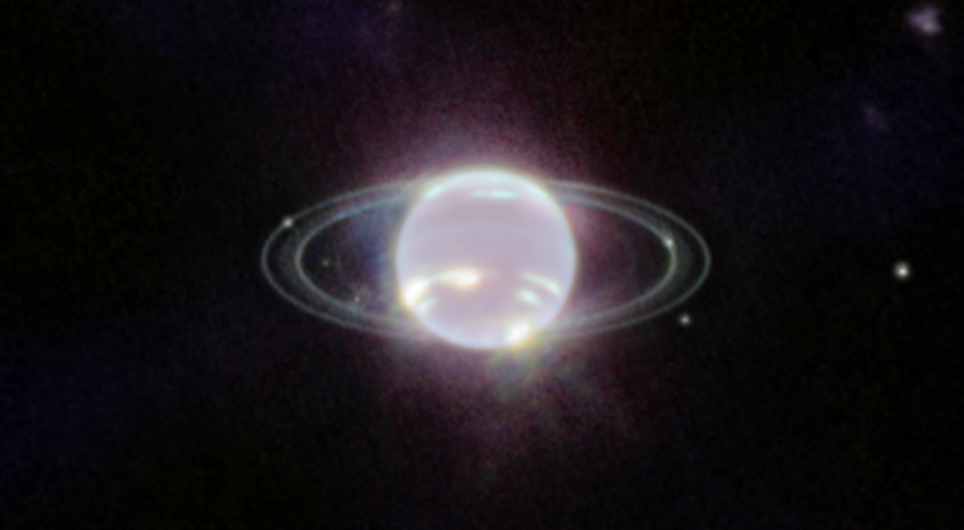 The images provided by NASA show Neptune with seven of its 14 moons in space – the first time astronomers have observed its rings in three decades.

NASA has released new images capturing Neptune and its rings, taken by the James Webb space telescope in July.

Neptune is the solar system’s outermost planet which has thin rings with faint dust bands around it.

These have been observed in infrared for the first time, allowing for seven of Neptune’s 14 moons to be captured.

The seven that can be viewed from the newly-released shots are Galatea, Naiad, Thalassa, Despina, Proteus, Larissa, and Triton.

Triton is Neptune’s largest and most unusual moon, which dominates the James Webb image of Neptune as a beaming point of light, creating signature diffraction spikes that are seen in many images.

The new telescope was launched last Christmas and experts are hope to be able to look back to the beginning of time when stars and galaxies were formed.

NASA’s Voyager 2 was the first spacecraft to view the icy, blue planet of Neptune in a 1989 flyby.

Heidi Hammel, of the Space Science Institute, said it had been three decades since astronomers last saw the rings from Neptune in detail.

And Ms Hammel wrote on Twitter: “More than 20 years in the making, and the James Webb Space Telescope delivered.

“…And that bright blue “star”? That’s no star! That’s Neptune’s fantastic moon Triton! It looks brighter than Neptune because at these near-IR wavelengths, Neptune’s atmospheric methane absorbs sunlight, making the planet darker – this is also why the rings pop out.”

James Webb is the world’s biggest and most powerful telescope and is floating about 930,000 miles above us.

Previous newsMahsa Amini was ‘tortured and insulted’ before death in police custody in Iran, her cousin says
Next news World’s first cloned Artic wolf is born in China: Pup named Maya is created using a donor cell from another of its kind and an embryo that was implanted in the womb of a beagle