Would YOU hop on board? Ultra-luxury submarine can carry three passengers 984ft underwater at impressive speeds of up to 11mph 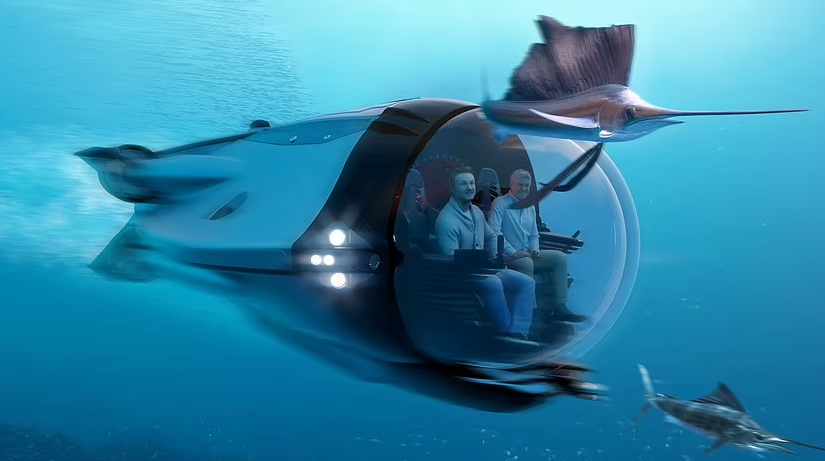 New Super Sub, capable of carrying three passengers, can dive 984ft underwater at speeds of up to 10 knots
The vessel is aimed at ecotourists who want to frolic under the sea with turtles, sharks and other marine life
Design unveiled by U-Boat Worx — a Dutch company which previously revealed it had a $5.8 million price tag
Sub due to undergo sea trials next Spring but one model has already been sold to what will be the first owner

When it comes to futuristic travel, this new ultra-luxury submarine has got to be up there for a way to explore the deep.

Capable of carrying three passengers at any one time, the ‘Super Sub’ vessel can dive 984ft (300m) underwater at speeds of up to 10 knots (11mph).

The bullet-shaped electric submarine is aimed at ecotourists who want to frolic under the sea with turtles, sharks and other marine life.

Its design has been unveiled by U-Boat Worx — a Dutch company which boasts that the submarine has the same efficient flow dynamics as an electric car.

‘We are very excited about this development,’ said U-Boat Worx CEO Bert Houtman.

‘It’s something we have been working hard on, and now to have the most flow-dynamic submersible possible, we couldn’t be more pleased.

‘We are confident that our clients will feel the same.

The Super Sub, which has four powerful thrusters delivering 60 kW of thrust, was first unveiled to the world in 2021.

‘The model itself is aimed at both private owners and commercial ventures,’ Heijdra said at the time.

‘It wouldn’t be surprising to see a high-end resort operate a Super Sub in the near future.’

The Super Sub’s life support system provides at least 96 hours of oxygen — however, passengers won’t be seeing mysterious creatures from the ocean floor because it is only rated for depths of slightly less than 1,000 feet (300m).

This is a region of the ocean known as the Mesopelagic or ‘twilight’ zone.

It is the last layer where the sun’s rays penetrate and its inhabitants include squid, swordfish, and bioluminescent fish, as well as jellyfish, sharks and dolphins who rise to shallower waters at night to feed.

The company has billed the Super Sub as its ‘fastest and most manoeuvrable design, delivering a dynamic dive experience and ability to deal with strong currents’.

With a long tail and bubble-shaped cabin, the Super Sub weighs about 20,000 pounds and comfortably seats two passengers and a pilot.

Designers behind the innovative vessel say it can make steep 30-degree climbs and dives while maintaining a 360-degree view for those on board.

The Super Sub is due to undergo sea trials in Spring next year but one model has already been sold to what will be the first ever owner.

It is unclear what they paid for it or how much U-Boat Worx has spent on the vessel’s design and build.

Running 17.5 feet long and 7.2 feet tall, the new ultra-luxury submarine is roomier and faster than other submersibles.

The Super Sub has ultra-light lithium-ion batteries and a 62-kilowatt propulsion system capable of lasting up to eight hours underwater between charges.

Earlier this year the company also unveiled a luxury submarine called the U-Boat Worx Nexus Series, which can carry nine passengers up to 656ft (200 metres) underwater.

The submarine features 900-914 litres of interior space per adult and can have its seats placed in various configurations.

On both sides of the pilot, three full-size seats for adults are available, while the pilot has a fixed seat in the centre.

Alternatively, the seats can be rearranged to accommodate one pilot, six adults, and two children, for a total of nine passengers.

It has a huge egg-shaped observation window and revolving seats so that everybody on board can get a great view.

Again, U-Boat Worx would not announce a price for a seat on board, a price for the entire submarine, or further details on how prospective customers can book.