Why the folding phone revolution has a way to go 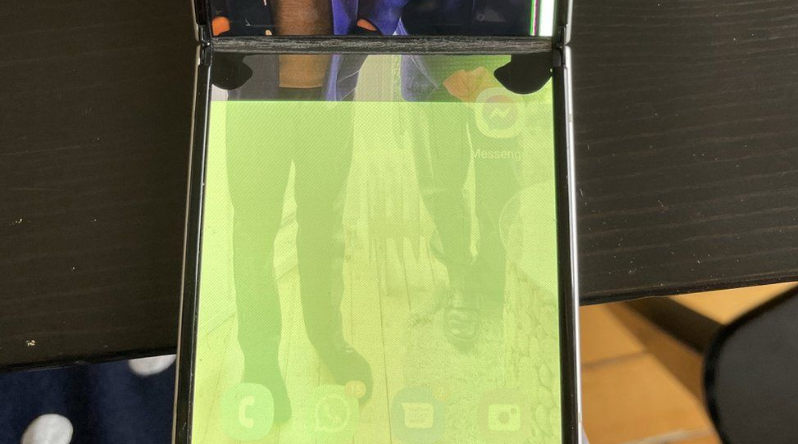 This time last year I had just become the proud new owner of a folding phone – the Samsung Galaxy Flip3.

For the uninitiated, this is a handset about the size of an average smartphone, which folds in half.

I told everybody who would listen that it was the phone I’d been waiting for since the Motorola Razr clam shell of 2004 – finally I’d have a device that would fit in my pocket again.

Thirteen months later, the dream is over. A couple of days ago the “fold” line suddenly got dramatically larger and turned silver, the lower half of the screen went green, the top half became unresponsive, and then an ominous black cloud began to spread around the screen.

It is now what you might call an ex-phone.

I’m not the only one – there are dozens of people online sharing similar tales of woe. One recent contributor on Reddit wrote that their brand new device broke within five hours.

Folding phones were unveiled to great fanfare in 2019. There was much industry speculation that this would be the device that would revitalise a stagnating smartphone industry, create a new buzz around handsets once again and persuade people to upgrade, as figures suggested they were holding on to their phones for longer, unenthused by homogenous black rectangles.

Huawei and Samsung led the foldable charge and remain the market leaders. Other rivals are mainly in the Chinese market – budget brands such as Oppo, Xiaomi and Vivo. Apple remains notably absent from the scene.

I remember sitting in a structure the size of an aircraft hangar in Barcelona that year, with audible gasps as Huawei showed off its version, the Mate X – with a launch price of about £2,000.

I persuaded an incredibly nervous member of the Chinese tech giant’s team to let me hold one, just for a few seconds, for a photo.

“Do NOT move the fold,” he begged.

That same year both firms delayed the launch of their new gadgets, Samsung at the last moment, when early reviewers reported broken screens.

But durability tests since then have showed improvement. Earlier this month Samsung unveiled the next generation of its foldables – the Fold4 – and promised tougher screens and improved water resistance.

According to Samsung, the current generation should survive 200,000 folds. I can’t prove it, and I am a heavy phone user, but I’m not convinced I opened mine that often in the 13 months I had it.

As for the “folding revolution” – well Samsung says it sold almost 10 million folding handsets in 2021 and there is certainly a fanbase for the devices online. However that same year, Apple sold more than 49 million iPhones in just three months, according to consumer data company Statista. So folding handsets are still a very small chunk of the multi-billion dollar smartphone industry.

“I haven’t seen loads of broken foldables,” Ben Wood of analysts CCS Insight tells me, “but at a time when [our research shows] people are keeping their phones in the UK for four years or more, people are looking to have phones that last longer.”

The long-time industry watcher is confident Samsung’s new phones will have more longevity and, he says, manufacturers have to do something different if they are to compete with the “freight train” of a product that is Apple’s iPhone.

“I really admire Samsung for saying we have to be bold, we have to do something different.

“Do we all need a foldable phone? Absolutely not. It’s definitely for people who want something that looks different. The Flip in particular has a strong female bias.”

The phone, which folds horizontally into a more compact, square device is certainly more sympathetic to being carried inside smaller pockets – or indeed lack of pockets altogether – that are often an unwanted feature of women’s clothes.

I had no issues with my folding phone while it worked, and it was often a conversation starter because it was so unusual. I only ever met one other fellow Flip3 owner, a man on a train who asked me where I got the case for mine, because he kept dropping his (the shiny exterior is very slippery – mine also suffered some knocks).

“I’ve only ever seen those on the telly!” said one lady who stopped me in a cafe to have a look. I asked her whether she wanted one, and she just laughed.

You can of course repair them – at a cost. The price of an inside screen repair is £309, according to the Samsung website – that’s £90 more than the cost of a new screen on its standard device the S21. A new Flip3 handset is currently advertised at £899 if bought outright. Samsung also offers an insurance package which brings down repair costs.

But given the environmental impact of making smartphones – there are about 60 elements in a handset – not to mention soaring costs of living, longevity is more crucial than ever. Android and Apple software have been tweaked to keep older devices running for longer – Apple controversially even slowed down older iPhones in order (it said) to prolong the battery life.

In the current climate, a folding phone may feel like a risky approach to a device that millions rely on every day. I’ve gone back to a budget Android while I figure out my next move – but I’m not sure I’ve fully closed the door on foldables.

Previous newsHeatwave: England has had joint hottest summer on record, Met Office says
Next news Snapchat to cut a fifth of jobs