Waymo unveils autonomous, all-electric MINIVAN that has no steering wheel or pedals – but sports three touchscreens – in further push for ride-hailing expansion

Waymo unveiled a driverless, all-electric minivan that seats five people
The sleek vehicle has no steering wheel, no pedals and no mirrors, but it does have automated sliding doors and three touchscreens
Waymo currently offers some form of robotaxi services in two states, Arizona and California
‘Vehicles can become a place to entertain friends, a movable office for meetings, a room for kids to study in, or a relaxing lounge,’ Waymo’s partner Geely said

Waymo unveiled an autonomous, all-electric minivan with no wheels, pedals or mirrors that represents a bet on the future of ride-hailing.

The company, which is a subsidiary of Google parent Alphabet, is partnering with Geely Group’s Zeekr brand and has designed it as an all-electric ‘transporations-as-a-service (TaaS)-optimized’ vehicle.

Waymo currently offers some form of robotaxi services in two states, Arizona and California, and showed off the minivan at a Los Angeles press event this week.

The sleek-looking white vehicle has sliding doors that are reminiscent of the New York City subway, but it does not have wheels, mirrors or pedals.

Inside, there are three touchscreens – where passengers can play music or choose a destination – and enough room for five people.

‘Vehicles can become a place to entertain friends, a movable office for meetings, a room for kids to study in, or a relaxing lounge to kick back and catch some ZZZ,’ Geely said in a press release. ‘Users just need to take a step inside and relax on the go.’

According to ArsTechnica, there’s a cylindrical sensor repeated six times on the vehicle, which is most likely LIDAR, plus additional sensors that are lower-mounted in the front and back. 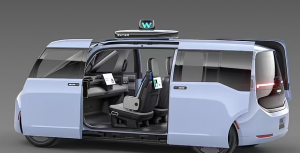 ZEEKR CEO Andy AN said: ‘The unveiling of ZEEKR’s SEA-M has shown the brand’s technological strengths and potential.

‘Going forth, ZEEKR will continue to work with great global partners to support better and more sustainable intelligent mobility for all.’

Waymo opened up its fully driverless ride-hail service in downtown Phoenix to all members of the general public last week in a significant expansion of the technology in a major city.

The news came a day after Waymo secured its driverless deployment permit from the California Department of Motor Vehicles, which allows Waymo to charge for autonomous services, such as delivery, in San Francisco — and it’s a step toward full driverless taxi deployment in the Golden State.

The company had previously been operating the driverless service in downtown Phoenix only for people in its ‘trusted tester’ program.

Waymo’s offering in downtown Phoenix will allow anyone who downloads the app and hails a ride in Waymo’s service area to pay for what the company calls a ‘rider-only’ experience in one of its fleet of Jaguar I-Pace EVs.

Earlier this month, Waymo also launched rides – with a driver in the front seat – to Phoenix’s airport from the city’s downtown, according to TechCrunch.

The company currently has over 700 vehicles in its fleet, which includes a mix of Jaguar I-Pace EVs and Chrysler Pacifica Hybrid minivans as well as the Class 8 trucks.

Most of these vehicles are located in Arizona, California and Texas – and are used in testing and commercial operations.

Previous newsUkraine war will be over by end of spring, country’s deputy defence minister predicts
Next news US presidential election 2024: Democrats who might challenge Biden