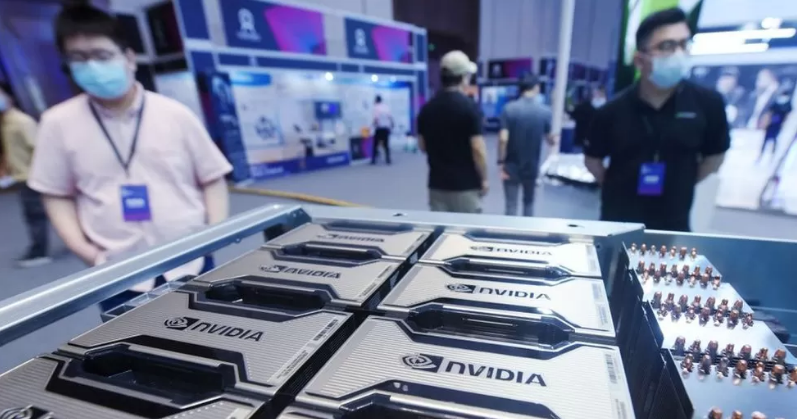 Shares of major chipmakers Nvidia and AMD have fallen amid concerns of new US restrictions on the sale of artificial intelligence chips to China.

Nvidia says the US government requires a new licence, effective immediately, to address the risk of chips being “used in, or diverted to a ‘military end use’… in China and Russia”.

There are fears the rule could lead to millions of dollars in lost revenue.

Shares of both chipmakers slipped in after-hours trading in New York.

The new restrictions are a “gut punch for Nvidia”, Dan Ives of Wedbush Securities told the BBC.

Chinese officials have firmly opposed the latest move. According to state media, “actions from the United States deviated from the principle of fair competition and violated international economic and trade rules”.

In a statement, Beijing said “The US side should immediately stop its wrongdoing, treat companies from all over the world including Chinese companies fairly, and do more things that are conducive to the stability of the world economy.”

The US Commerce Department told the BBC it was “not in a position to outline specific policy changes at this time”.

“We are taking a comprehensive approach to implement additional actions necessary related to technologies, end-uses, and end-users to protect US national security and foreign policy interests,” a Commerce Department spokesperson said.

“This includes preventing China’s acquisition and use of US technology in the context of its military-civil fusion program to fuel its military modernisation efforts, conduct human rights abuses, and enable other malign activities.”

In a US regulatory filing on Wednesday, Nvidia said the new licence requirement would hit exports of its A100 and H100 chips, which are designed to speed up machine learning tasks, and the systems which include them.

Around $400m (£345.2m) in sales to China could be affected, Nvidia added, “if customers do not want to purchase the company’s alternative product offerings or if the (US government) does not grant licenses in a timely manner or denies licenses to significant customers”.

A Nvidia spokesperson told BBC it was liaising with customers in China “to satisfy their planned or future purchases with alternative products”.

Meanwhile, an AMD spokesperson said the rules, which would prevent the shipment of its MI250 chips to China, were not expected to have “a material impact” on business.

Both Nvidia and AMD halted sales to Russia after the invasion of Ukraine in February.

Analysts said the US requirements could make it more difficult for China to acquire chips for advanced computing.

It could also affect the earnings of US manufacturers such as Nvidia and AMD, said Mario Morales, a California-based analyst at market intelligence firm IDC.

“Both companies have a large exposure to China and could see more impact going forward, especially if China chooses to retaliate,” Mr Morales said.

Last week, Nvidia reported a revenue of $6.7bn in the second quarter, which was significantly lower than forecasts.

However, it said revenue from its data centre business – which produces computer chips – surged by 61% from a year earlier.

“This is really a shot across the bow at China and it’s really going to fan those flames in terms of geopolitical (tensions). Nvidia’s caught in the crossfire,” Mr Ives said.

The US and China are locked in a long-running dispute over trade and technology.

Tensions between the world’s two biggest economies rose earlier this month, after US politician Nancy Pelosi made a controversial visit to Taiwan.

China sees the self-ruled island as a part of its territory and insists it should be unified with the mainland, by force if necessary.