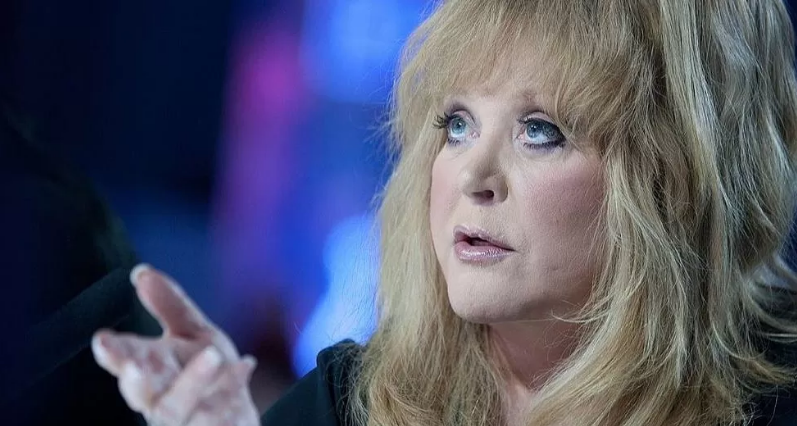 One of Russia’s most popular singers, Alla Pugacheva, has called on the Russian authorities to declare her a “foreign agent”, in solidarity with her strongly anti-war husband Maxim Galkin.

A showbiz star too, he was labelled a “foreign agent” on Friday after condemning Russia’s attack on Ukraine.

On social media Pugacheva called her husband “a true incorruptible Russian patriot, who wants… an end to our lads dying for illusory aims”.

She has been a big star for decades.

She said the Kremlin’s “illusory aims” in Ukraine “make our country a pariah and the lives of our citizens extremely difficult”.

The label “foreign agent” has been applied by the Russian government to various media organisations, campaign groups and individuals openly critical of Kremlin policies.

Alla Pugacheva has been a musical megastar here for decades. First, in the Soviet Union, where she began her career in the 1960s; then, after the fall of the USSR, in Russia.

She is a hugely popular and well-respected artist, which makes her public comments about Russia’s offensive in Ukraine big news.

Her assertion that “our lads are dying for illusory aims that make our country a pariah and the lives of our citizens extremely difficult” is likely to infuriate the Kremlin.

It remains to be seen whether it will have any effect on Russian public opinion over what the Kremlin still calls its “special military operation”.

Pugacheva and Galkin went to Israel in late March, a month after the Russian invasion, and Pugacheva returned to Russia late last month with her children.

In early September President Vladimir Putin’s spokesman Dmitry Peskov said of Galkin: “Our paths have clearly diverged – he has made very bad statements.”

Galkin condemned Russian troops’ alleged atrocities and said there could be no justification for the Ukraine invasion.

Artemy Troitsky, a leading figure in Russian music who left the country in 2014 because of his opposition to Vladimir Putin and now lives in Estonia, told the BBC Pugacheva’s intervention was significant.

“Alla Pugacheva is the biggest pop star in Russia in the past almost 50 years,” he said.

“Her fame is monumental and she’s a legendary figure. I think this is something that many people have expected her to do some time ago because her husband, Maxim Galkin, he’s made his anti-war statements already many times and several months ago.

“I think this is her first ever strong political statement and this in itself, of course, is quite shocking for the people in Russia. I think she’s not the only one who may turn the public opinion. The obvious wrongdoings of the Russian army and the offensive of the Ukrainian army and the worsening economic situation and so on, all those factors they work against Putin and against the war.

“But I think that morally and emotionally this statement of Alla Pugacheva is maybe one of the most strong efforts in these directions.”

Russia says it is fighting neo-Nazis in Ukraine – a claim widely dismissed – and that it is threatened by the Nato alliance’s strong relations with Ukraine.

Since the invasion on 24 February, the UN has recorded at least 5,718 civilian deaths, with 8,199 injured, and more than seven million Ukrainians have been recorded as refugees across Europe.

The actual civilian death toll is believed to be thousands higher. Tens of thousands of combatants have been killed or injured.

Russia, a global energy supplier, is locked in an economic struggle with the West which imposed sweeping sanctions in response to the invasion.

Previous newsGenetically modified PURPLE tomatoes that produce 10 times more antioxidants are set to hit the market: Study with cancer-ridden mice found those that ate them lived 30% longer
Next news King Charles issues message of thanks to nation ahead of Queen’s funeral