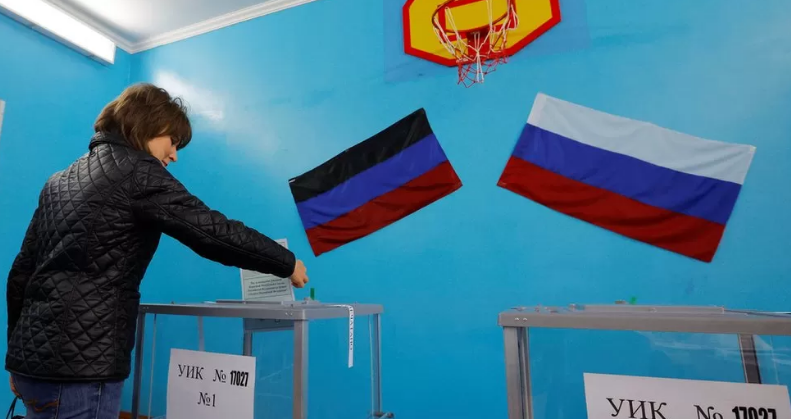 Four so-called referendums have ended in Russian-held regions of Ukraine – votes which Moscow may use as grounds to annex more territory.

Moscow-installed officials in the regions are now claiming almost total support among those who took part in the disputed votes on joining Russia.

The polls were denounced as a sham by Ukraine’s government and its allies.

In the absence of international recognition, the process was not monitored independently.

The votes were held in the breakaway eastern regions of Donetsk and Luhansk.

Ballots in Russian-occupied parts of the southern regions of Kherson and Zaporizhzhia were also organised.

Refugees scattered across Russia were also able to vote at dozens of polling stations, including in Crimea, a southern Ukrainian peninsula annexed by Russia in 2014. Partial results from voting there indicated huge majorities in favour of joining Russia.

Up to four million people were asked to vote in the war-torn regions, which make up about 15% of Ukraine’s territory.

run by the pro-Kremlin administrations in Donetsk and Luhansk are reporting that up to 99.23% of people voted in favour of joining Russia – a high percentage that would be unusual in a vote of this nature.

There is speculation that Russian President Vladimir Putin may announce the four regions’ annexation in a speech to a joint session of Russia’s parliament on Friday.

In March 2014, he announced that Crimea had joined Russia just a few days after a similarly unrecognised referendum was held there.

If Russia annexes the four regions, which Moscow does not fully control, it could take the war to a new and more dangerous level, with Moscow portraying any attempt by Ukraine to regain them as an attack on its sovereign territory.

“This farce in the occupied territory cannot even be called an imitation of referendums,” he said on Tuesday night.

The president added that it was “a very cynical attempt to force men in the occupied territory of Ukraine to mobilise into the Russian army in order to send them to fight against their own homeland!”

“We need an extremely serious, effective response with specific things that will hit the Russian economy. The softer the reaction to the so-called referendums, the greater the motivation for Russia to escalate and annex further territories,” he said.

The UK responded to the so-called referendums with new sanctions targeting top Russian officials involved in enforcing the votes.

US Secretary of State Antony Blinken reiterated that the West would never recognise Russian annexations, warning the Kremlin of “additional swift and severe costs”.

French Foreign Minister Catherine Colonna, who on Tuesday visited Ukraine, described the polls as a “masquerade”.

In China, a traditional Russian ally, foreign ministry spokesperson Wang Wenbin said the “sovereignty and territorial integrity of all countries must be respected”, when answering a reporter’s question about the so-called referendums.

President Putin defended the referendums, saying they were designed to stop the persecution of ethnic Russians and Russian-speakers by Ukraine – a charge the Ukrainian government denies.

“Saving people in all the territories where this referendum is being held is at the top of our minds and the focus of attention of our entire society and country,” the Russian leader said in televised remarks.

The results of the four self-styled referendums will be of little surprise to anyone, least of all Ukraine.

The votes in favour of joining Russia are a continuation of the Kremlin’s narrative of trying to “liberate” Ukrainians in those areas, as well as its attempts to legitimise its presence in the country.

Ukraine and the West have discredited the process, and the BBC has heard evidence of armed soldiers collecting votes door to door, as well as claims of voting not being held at all.

Russia is expected to draft quick, new laws around the annexation of these four contested territories, and has threatened the use of more lethal weapons if they are targeted in the future.

What Kyiv has always said is that its objectives have not changed, regardless of the statements (and now results) which come from Moscow.

“With my voice, I want to try to make a small contribution to stopping the war,” Galina Korsakova, 63, from Donetsk told AFP news agency at a polling station in Crimea. “I really want to go home.”

The unrecognised plebiscites were held as the war raged on, and at least one election official was killed, in a missile attack in the Zaporizhzhia city of Berdyansk.

Since Russia invaded Ukraine on 24 February, tens of thousands of combatants and civilians have been killed or injured, while whole cities and towns have been largely reduced to ruins.