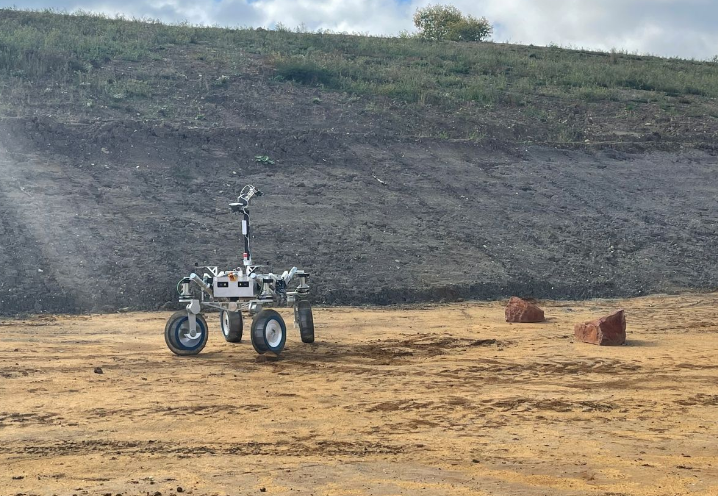 While the rover was originally set to travel to Mars to work alongside Perseverance, experts have suggested its technology could be useful for several other purposes.

A planetary rover that could end up being used to build habitats on the Moon or explore the surface of Mars has been put through its paces at a quarry in Milton Keynes.

However, Anon was let go from the mission after NASA and the European Space Agency announced Perseverance was already collecting samples on its own.

Despite this, engineers at the aerospace company Airbus, who have been working on the SFR since 2018, have continued to develop and test the machine.

Part of that development process includes quarry testing, which provides a unique landscape to test all the rover’s systems simultaneously for the first time.

“Even though the mission may have faded away, the core technology is still ready and able to go, and this is the kind of the final step in proving that it works,” said Airbus’s project manager, Ben Dobke

“With the Artemis programme happening at the end of the decade, the focus has started shifting towards the moon.

“So any rovers or autonomous vehicles on the Moon, this software can certainly be applied to that in the future.”

The Artemis mission’s long-term goal is to set up a permanent base camp on the Moon and facilitate human missions to Mars.

What will engineers need to test on the rover?

In order for Anon to be used in future Moon programmes, engineers need to consider temperatures on the lunar surface and make sure the rover’s key systems will work in the lack of atmosphere.

They will also have to make sure the SFR can be powered up after spending 14 nights essentially in sleep mode because of the cold temperatures when it is in darkness.

The prototype has been designed to operate six times faster than the ExoMars rover, also known as Rosalind Franklin, which is currently exploring the red planet.

However, unlike the six-wheeled ExoMars rover, the SFR only has four wheels as well as a greatly enhanced autonomous navigation capability, engineers explained.

What could Anon be used for?

While the rover was destined to travel to Mars, experts have suggested its technology could be useful for several purposes, including building habitats on the moon.

“There are various avenues of investigation, so it could be scientific, going into places where there’s lunar ice,” Mr Dobke added.

“It could be in support of human habitats, whether it be autonomously building habitats or whether it’s supporting driving astronauts around on the surface.

“So there are a number of different applications that we could have autonomy on the moon.”

It could also be used for “autonomous vehicles, inspecting infrastructure and down tunnels and in difficult terrains”, according to space systems lead at the UK Space Agency, Dr Adam Camilletti.

“All the technology that’s been developed for Sample Fetch Rover is still really, really useful because we’ve developed a huge amount of expertise and know-how in the UK,” he said.