Next two years will be ‘challenging’, says Chancellor Jeremy Hunt – as disposable incomes head for biggest fall on record 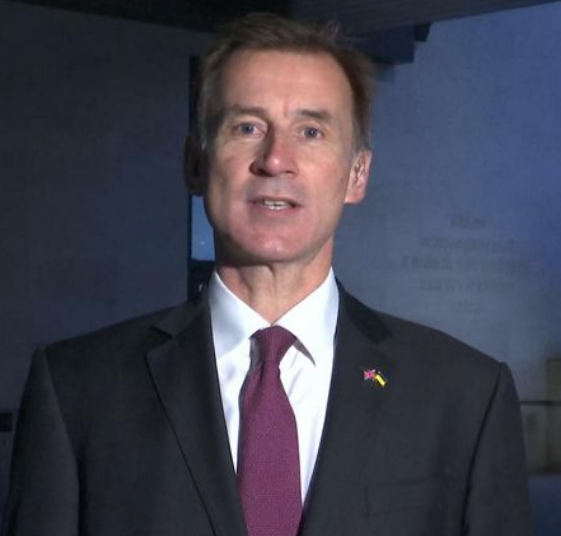 Treasury analysis suggests around 55% of households will be worse off as a result of the measures announced in the chancellor’s autumn statement, while Labour has blamed “12 weeks of Conservative chaos” and “12 years of Conservative economic failure” for the bleak outlook.

The UK’s economic outlook will be “challenging” for the next two years, Jeremy Hunt says.

The chancellor presented his autumn statement to parliament on Thursday, littered with stealth taxes and curbs on government spending amounting to £55bn in an attempt to plug the black hole in the public finances.

But the independent Office for Budget Responsibility (OBR) warned the disposable incomes of UK households would fall by 7.1% over the next two years – the biggest drop on record.

Mr Hunt said it was “a difficult time for everyone” but tax hikes and spending cuts are needed to get the economy “on an even keel”.

“Over the next two years it is going to be challenging,” he said.

“But I think people want a government that is taking difficult decisions, has a plan that will bring down inflation, stop those big rises in the cost of energy bills and the weekly shop, and at the same time is taking measures to get through this difficult period.”

The chancellor insisted that his autumn statement is a “very Conservative package” following criticism from some Tory MPs.

“The Office for Budgetary Responsibility said yesterday that what we’re doing is actually recession shallow, it’s saving jobs,” he said.

“And we’ve done all of those things and that is why this is a very Conservative package to make sure we sort out the economy.

“None of this is easy, but it’s the right thing to do.”

Former business secretary Jacob Rees-Mogg accused the chancellor of taking the “easy option” in Thursday’s autumn statement rather than bearing down harder on public spending.

He said the country needed lower taxes to drive up growth.

Probed on how it can be fair that pensions will go up by inflation when public sector workers will not see pay increase alongside prices, Mr Hunt said the elderly do not have the ability to work more to improve their take home pay.

“Well, I think the truth is, first of all, pensioners have retired. They don’t have the ability to work more or work longer hours in the way that people of working age do,” the chancellor said.

“But I think it is wrong to say that only the poorest pensioners are feeling the squeeze at the moment.

“I think this is something that’s affecting everyone and I think it’s right.

“Having made that promise to pensioners in our manifesto that we would have this triple lock, I think this is exactly the kind of tough time that people want it to kick in.

“And so that’s why I think it’s the right thing to do.”

The chancellor added: “We’re not pretending that this isn’t going to be a difficult time for everyone. But what we have is a plan.”

• Pensions triple lock will remain – with pensioners to see a 10.1% increase in weekly payments in line with inflation

• Spending on public services in England to rise slower than planned

As a result of Mr Hunt’s announcements, the tax burden in the UK will also now be at its highest since the Second World War, and there are stark warnings about increased bills and higher unemployment as the recession takes hold – as well as predictions the economy will still shrink 1.4% in 2023.

But most of the difficult decisions on spending have been postponed until after the next general election, due in 2024.

Treasury analysis suggests around 55% of households will be worse off as a result of the measures.

Shadow chancellor Rachel Reeves accused the government of forcing the UK economy into a “doom loop where low growth leads to higher taxes, lower investments and squeezed wages, with the running down of public services”.

Ms Reeves told Sky News she is “really worried about what’s going to happen to people’s living standards next year from April” and said a Labour government would have done more “to alleviate some of that pressure on the ordinary working person”.

While Sir Keir Starmer said his party “would have made different choices” and accused the government of having “gone after working people again” and putting the country in “a doom loop”.

“We would have put a plan for growth on the table that actually runs towards the challenges of tomorrow,” the Labour leader told broadcasters.

The foundation said the statement had piled further pressure on the “squeezed middle” and that the focus on “stealthy” tax threshold freezes to raise revenue would extend far beyond high earners.

The think tank also found that the budget would reverse much of the government’s levelling up agenda.

Speaking at a news conference, the IFS’s director Paul Johnson said the 7% drop in disposable income over the next two years will “hit everyone”, adding that “middle England is set for quite a shock”.

“The truth is we just got a lot poorer. We are in for a long, hard, unpleasant journey; a journey that has been made more arduous that it might have been by a series of economic own goals,” he said.