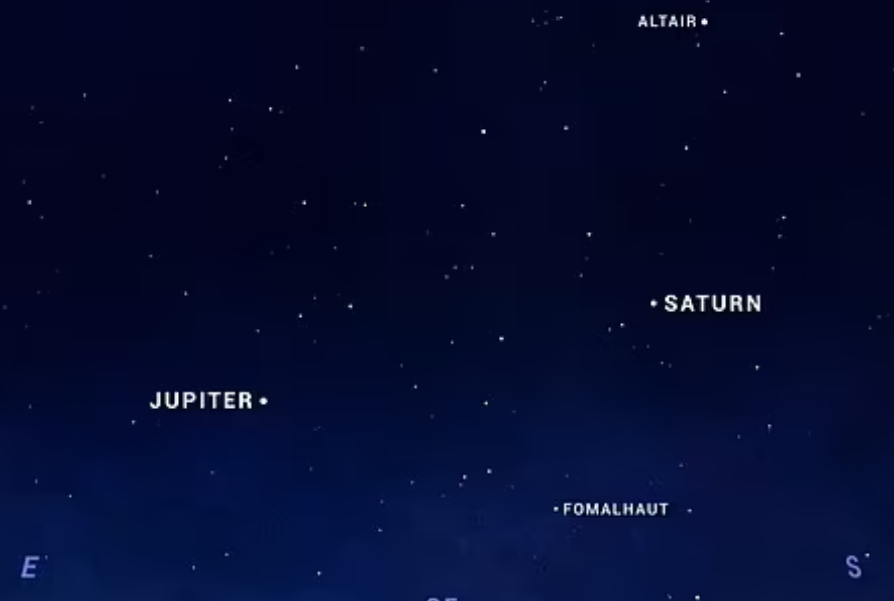 NASA is urging stargazers to enjoy ‘evenings with giants’ this month — as the massive planets Jupiter and Saturn will be visible in the night sky for the next few weeks.

Early in the evening, you’ll find them to the southeast, moving slowly westward with the stars over the course of the night.

‘They form a triangle with bright star Fomalhaut,’ the US space agency explained on its website.

‘When observing this trio, note how the planets shine with a steady light, while the star twinkles. This can be an easy way to know if what you’re looking at is a planet or a star.’

At the end of last month, astronomers revealed that Jupiter would appear at its biggest and brightest in decades, as it made its closest approach to Earth in 59 years.

It is still some 367 million miles away from us, but not since October 1963 have stargazers had such a great opportunity to spot it in the night sky.

The gas giant came closest to Earth in almost 60 years on September 25, and 24 hours later reached opposition, meaning the planet appeared opposite the sun to those on Earth.

The planet’s closest approach to Earth hardly ever coincides with opposition, which NASA said meant that this year’s views would be ‘extraordinary’.

The overlap of the two events, which will not take place again until 2139, means that Jupiter will appear brighter and larger in the sky for the next few weeks.

When it comes to other celestial sights this month, Mars has been steadily working its way toward the east all year like it usually does, relative to the background stars.

But at the end of October, the Red Planet halts this apparent motion, and then appears to reverse course.

Over the next three months, from November to late January, the planet moves toward the west each night, then near the end of January it reverses direction again and continues its eastward journey.

This is what is called the retrograde motion of Mars, NASA said.

‘It happens about every two years, and it really threw early observers for a loop,’ the US space agency wrote.

Earth and Mars are on roughly circular paths around the sun, like cars on a racetrack, but our planet Earth is on the inner, faster track.

About every 26 months, we overtake Mars, which is moving slower in its orbit. During that period when we’re passing Mars, and before we round the bend in our orbit to pull away from it, we see Mars in retrograde, appearing to change direction, even though it’s still moving forward in its orbit.

Amateur astronomers have been told to take note of how Mars’ position changes with respect to Betelgeuse, Aldebaran and the Pleiades over the weeks.

NASA added: ‘You’ll be witnessing what was once a source of intense curiosity for astronomers, but which we now know is just a sign of two planets passing in the night.’

The Orionid meteor shower is also active throughout October and November, and peaks on the night of October 20.

It is a moderate shower, usually producing 10-20 meteors per hour at its peak, under clear, dark skies.

The bad news is that this year the moon will be about 20 per cent full on the peak nights, so it will interfere a bit when it rises a couple of hours before dawn.

However, it shouldn’t completely spoil the view.

The shower’s name comes from the fact that you can trace the paths of its meteors back to an area on the sky near Orion.

These meteors are fragments of dust left behind by Comet Halley in a trail that extends along its orbit. They tend to be bright and fast moving, and they often leave persistent trails that can glow in the sky for a few seconds after they streak by.

No special equipment is needed to observe meteor showers.

‘Just make sure you’re warm enough, and viewing from a safe, dark spot away from bright lights. Then all you have to do is look up and enjoy the show,’ the US space agency said.