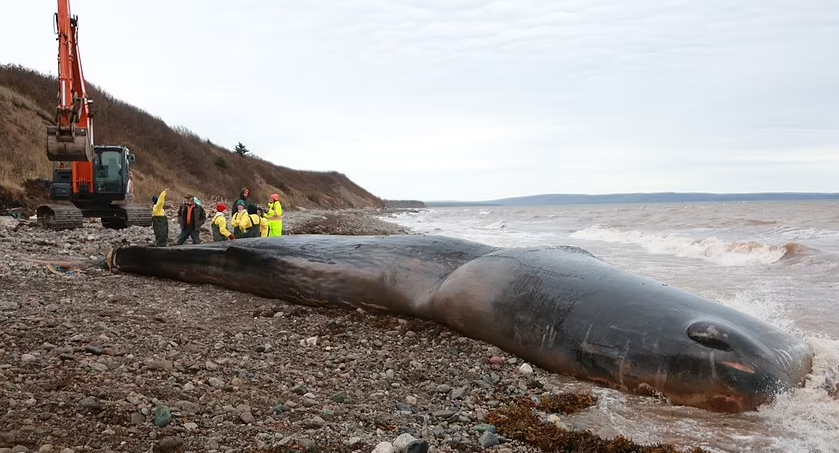 The 45-foot-long whale was emaciated, weighing about 30 tons, when it washed ashore in Nova Scotia
An autopsy revealed the whale had more than 330 pounds of trash in its stomach that included fishing nets, gloves, ropes and various plastic items
Wildlife officials said this incident is a ‘stark reminder’ about human trash littering Earth’s oceans

A sperm whale died a ‘slow and painful’ death on the shores of Nova Scotia earlier this month after ingesting 330 pounds of trash compacted in its stomach.

The 45-foot-long male looked emaciated when it came ashore on November 4, and although teams worked to save the whale, it died the next day.

The Canadian Wildlife Health Cooperative conducted an autopsy shortly after and found fishing nets, ropes, gloves and various items made of plastic.

The Marine Animal Response Society (MARS) recently shared the incident, which said the whale’s death is a ‘stark reminder’ about how serious the issue is of human trash littering Earth’s oceans.

The average adult sperm whale weighs between 35 to 45 tons, but this full-grown male weighed no more than 30 tons due to the trash hindering its ability to eat.

Tonya Wimmer with : ‘Seeing the sperm whale so close to shore and so thin are some really concerning signs.’

The whale was found on a rocky shore in Craigmore, near Judique in Cape Breton.

‘We found a bit of gear, and then it kept going and it kept going. We realized the full extent of what we saw was horrific,’ Wimmer said.

Sperm whales eat like vacuums – they open their mouths and let whatever is around flow inside, which makes them more at risk of ingesting trash in the water and on the seafloor.

Wimmer said because of how sperm whales feast, it is common to find plastic in their stomachs, but the clump compacted in the male is more than she has ever witnessed in the past.

This massive amount of trash blocked the animal from consuming food, causing it to die of starvation

‘This would have been incredibly horrific and traumatic for this animal to die slowly,’ Wimmer said.

The male is just one of many sperm whales found with plastic trash in its stomach.

Another sperm whale washed ashore in Northumberland in 2019 and a post-mortem exam revealed plastic inside its stomach.

Then there was one in 2018, which washed ashore in eastern Indonesia and had a 13-pound lump of plastic waste in its stomach.

The cause of the death was unknown, and the carcass was to be buried shortly after without an autopsy because of its decayed condition.

A more recent study, released earlier this month, announced that baleen whales- blue, humpback and fin whales – eat up to 10 million pieces of microplastic every day.

Blue whales ingest the most, as they feed almost exclusively on shrimp-like animals called krill.

‘They’re lower on the food chain than you might expect by their massive size, which puts them closer to where the plastic is in the water,’ said study co-author Dr Matthew Savoca.

‘There’s only one link: The krill eat the plastic, and then the whale eats the krill.’

It is thought that baleen whales may be at an exceptionally high risk of microplastic ingestion.

This is due to their filter-feeding behaviors, the vast volumes of prey they eat and the fact that they typically live in polluted regions, such as the California Current.

However, data on their daily plastic consumption is lacking and limits our understanding of its risk, health effects and how any impacts could be mitigated.

‘Large filter feeders like baleen whales evolved to process and filter vast amounts of the ocean, so they represent sentinels of environmental change including pollution like microplastics,’ said senior study author Jeremy Goldbogen.