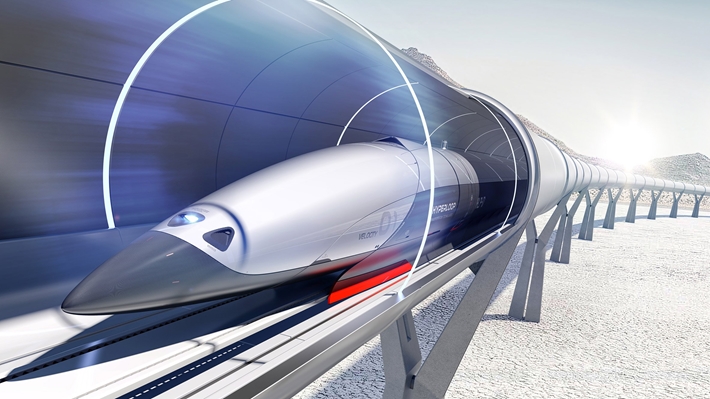 New concepts scare us. I would rephrase the sentence. Are we scared of innovations? What are we afraid of? We are fearful of change. A change that we are not sure of. Hyperloop technology transcending time- An envision of Ellon Musk, the billionaire founder of PayPal. Ellon Musk proposing for building a high-speed transportation system that would allow humans to travel 760 miles per hour, making our jaws drop. Hyperloop technology– A technology that is transcending time barrier which incorporates reduced-pressure tubes in which pressurized capsules ride on air bearings. Linear induction motors and axial compressors drive the pressurized capsules.

This transportation technology is the brainchild of an American research company which is also known as HTT, formed using a mix of crowdsourcing and team collaboration. Electric propulsion accelerates Hyperloop through a low-pressure tube. That glides at airline speed covering long distances due to ultra-low aerodynamic drag. Each pod holds up to 28 passengers; However, each pod to leave every 30 seconds during rush hour and on every two minutes on average.

Founded in 2014, the company with Richard Branson as a significant investor. The company was renamed Virgin hyperloop one in 2017. Now the question arises, Is it implemented anywhere? Virgin hyperloop to begin testing full-sized hyperloop systems in 2021. The United Arab Emirates and India, too, will get to experience Ellon Musks envision- Magnetic levitation technology. India will soon get its first hyperloop that could cut down the travel time to 23 minutes fro Mumbai to Pune. A train gliding at a speed of 496 km per hour transcending the time barrier.

What ‘s the Impact of This Technology on Our Society

Ellon Musks’ innovation is moving at lightning speed towards reality. It is moving faster than a train, safer than a car, environment-friendly as well when compared to aircraft. Won’t you like to know how it is environment-friendly? Well, the answer lies in — solar power and electricity. An external linear electric motor would provide velocity to the pod. Furthermore, the tubes would have solar panels on the top thereof, generating more energy. So, a project moving with an astounding speed with no speed breaker? Cost challenge is the most significant speed bump that is hindering the project.

How Hyperloop Technology will Benefit Us

Aside from travel time deduction, it can solve the housing problem. How? The cost of living at the heart of a city like London will always be high.Most of the time cost factor forces people to drift away from the mainland, But hyperloop is solving the problem at a remarkable speed. People won’t need to commute for longer to reach the central city. We are missing one point that it’s not only for passengers but for transporting goods too. “Delft Hyperloop, developed by the Netherland, carries both passengers and freight. Whether hyperloop technology takes time to reach us or not, but certainly it’s worth waiting.