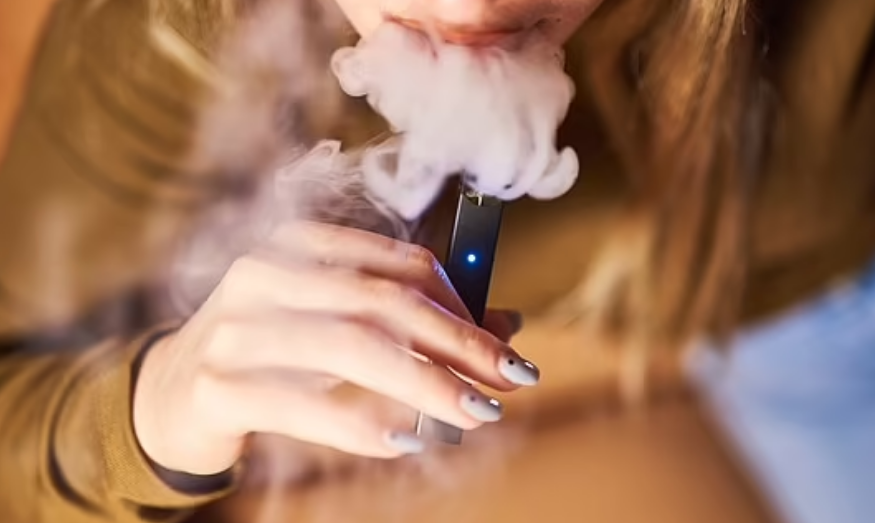 E-cigarette use could cause deadly arrhythmias, a new study finds
Researchers found significant drops in the heartbeat of mice exposed to smoke
The affect was significantly more pronounced it male mice than females
Arrhythmias cause around 150,000 deaths each year in the US

Vaping may cause heart damage similar to traditional cigarettes, a study suggests.

An irregular heartbeat can lead to life-threatening complications, including strokes, blood clots and even cardiac arrest in severe cases.

This was only the case with specific chemicals found in fruity and menthol flavored vapes which are becoming increasingly popular among children.

Tobacco cigarettes also cause users’ heartrate to drop just 20 minutes after smoking before shooting back up, according to the FDA.

Lead researcher of the study, Dr Alex Carll, an assistant professor at the University of Louisville, said: ‘Our findings demonstrate that short-term exposure to e-cigarettes can destabilize heart rhythm through specific chemicals within e-liquids.’

It comes as the US and UK grapple with a vape epidemic among children, with 2.6million US teens regular users.

The Biden Administration has vowed to slash the use of vapes in the US, with the Food and Drug Administration (FDA) cracking down on the industry this year.

Flavored devices – which are most popular among kids – now require specific approval from the agency to remain on US shelves.

The latest study, published in Nature Communications, exposed mice to e-cigarette aerosols to gauge how their hearts would react.

For all e-cigarette aerosols, the rodents’ heart rate slowed during active exposure to the smoke and sped up afterwards, indicating a ‘fight-or-flight’ stress response.

But menthol-flavored e-liquid or from propylene glycol alone caused ventricular arrhythmias and other disruptions to heart rhythm.

‘These effects could increase the risk for atrial or ventricular fibrillation and sudden cardiac arrest.’

While some believe e-cigarettes are relatively harmless compared to standard cigarettes, researchers have long warned that they carry risks of their own.

Previous research has found that people who regularly vape are at risk of developing airway obstructions similar to those suffered by people with asthma and COPD.

There are also reports of vape users suffering ‘popcorn lung’, a potentially devastating condition caused by the diacetyl in many flavored devices.

The recent Louisville research adds to the many potential long-term health defects tied to vaping, according to Dr Aruni Bhatnagar, an environmental medicine professor at the school.

‘The findings of this study are important because they provide fresh evidence that the use of e-cigarettes could interfere with normal heart rhythms – something we did not know before,’ he said.

‘This is highly concerning given the rapid growth of e-cigarette use, particularly among young people.’

Use of vapes among young people has emerged as a major health problem in the US and across the world.

The CDC reported earlier this month that 2.55million children aged 11 to 17 in America are using e-cigarettes. Nearly a third of that group use one every day.

While the figure has fallen from its peak of 5.4million teenage users in 2019, it still shows a worrying 20 per cent rise from 2021, where there were 2.06million users.

Previous newsEnergy bill help for all is too expensive, warns the World Bank
Next news Atrial fibrillation: Cannabis and other drugs linked to increased AFib risk