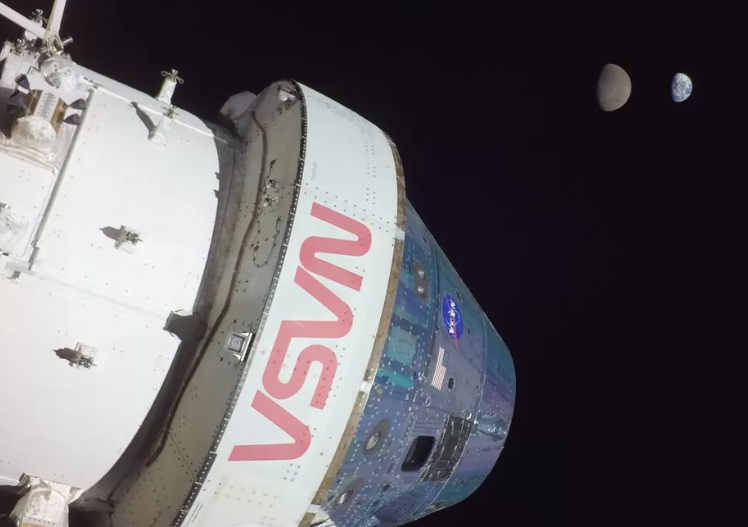 The US space agency’s Orion capsule has reached a key milestone on its demonstration mission around the Moon.

On Monday, it moved some 430,000km (270,000 miles) beyond the Earth – the furthest any spacecraft designed to carry humans has travelled.

The ship is uncrewed on this occasion, but if it completes the current flight without incident, astronauts will be on the next outing in two years’ time.

Nasa is planning a series of ever more complex missions with Orion.

They’re part of the agency’s Artemis programme, which seeks to return people to the lunar surface after a gap of 50 years.

Monday’s milestone marks the middle point of the mission.

“This halfway point teaches us to number our days so that we can get a heart of wisdom,” said Mike Sarafin, Nasa’s Artemis mission manager.

“The halfway point affords us an opportunity to step back and then look at what our margins are and where we could be a little smarter to buy down risk and understand the spacecraft’s performance for crewed flight on the very next mission.”

Orion has been streaming back some spectacular video of its journey. Just before reaching the record distance, it captured the Moon moving in front of the Earth.

The capsule was launched from Florida’s Kennedy Space Center on 16 November on a 26-day mission designed to stretch its systems and make sure it is safe to carry astronauts.

Orion is being pushed through space by a service module provided by the European Space Agency (Esa). This vehicle incorporates the big thrusters needed to make manoeuvres.

The Esa module delivered two key engine burns last week to get Orion into a big loop around the Moon known as a Distant Retrograde Orbit.

It’s called “distant” because the path takes Orion a long way from the Moon’s surface (61,000km; 38,000 miles) and “retrograde” because it sends the capsule in the opposite direction to the lunar body’s direction of travel.

It will require two further manoeuvres in the coming days to put the capsule on the correct trajectory to come home.

The spacecraft is due to splash down in the Pacific Ocean off San Diego in California on 11 December.

Controllers have been delighted with the performance to date. Orion, with its shepherding Esa module, has used much less fuel than expected. It’s also generated more power than anticipated, while also being very frugal with its energy consumption.

There have been some small technical niggles, but “none of the anomalies, or funnies, that are out there are of consequence”, said Mr Sarafin.

Controllers did lose communications with the capsule for 45 minutes on one occasion but this was determined to be an issue related to the configuration of equipment on Earth.

The previous record for the most distant point reached by a human-rated spacecraft was set by the Apollo-13 mission in April 1970.

It went out to 400,171km (248,655 miles) from Earth as its crew fought to navigate their way home following an explosion in their capsule’s service module.

One of the manikins on board Orion has been nicknamed Commander Moonikin Campos in honour of Arturo Campos, a Nasa engineer who played a critical role in helping to get the troubled Apollo 13 back.

The first crewed Artemis mission is presently scheduled for late 2024. An Orion flight that would also see astronauts go down to the lunar surface could occur as early as 2025 or 2026.

“Not only are we going farther and coming home faster, but Artemis is paving the way to live and work in deep space in a hostile environment, to invent, to create, and ultimately to go on with humans to Mars.”

Previous newsClimate change will cause waves of migration into Britain that will make current levels seem like ‘nothing’, former head of MI5 warns
Next news Type 2 diabetes: Artificial intelligence model predicts onset within 12 hours